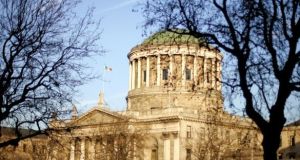 The man at the centre of the case is an EU citizen who wanted to bring his family here from a country outside the EU.

Freedom of movement of EU nationals in accordance with law is among the greatest and “too often undersung” achievements “of our wonderful European Union”, a High Court judge has said.

Mr Justice Max Barrett made the comments in a judgment on Tuesday dismissing a man’s appeal over being refused visas for his wife and son due to his abuse of the system governing freedom of movement.

The man is an EU citizen who wanted to bring his family here from a country outside the EU.

He moved here in March 2015 and five months later he made the visa application for them under EU Treaty Rights and the Citizens’ Rights directive.

His application was refused and in December 2017 the Minister for Justice and Equality affirmed that decision.

He took a High Court case seeking to quash the refusal decision as well as damages for suffering and breach of rights.

In his judgment, Mr Justice Barrett said an EU member state can restrict freedom of movement rights in instances of abuses and/or fraud.

A Department of Justice appeals officer who rejected his appeal noted the man had failed to provide a convincing explanation for inconsistencies within the visa application, the judge said.

This included where he described his relationship with his wife in a previous unsuccessful UK visa application as being “other than married.”

There was also a failure to prove he was genuinely resident or employed in Ireland, the judge said.

Gardaí had said he did not appear to be resident at the property where he claimed to be, and that it was his employer’s address.

A tenancy agreement and utility bills for that address appeared to have been put in his name “merely to give the appearance that he has a life in Ireland and resides here,” the officer said. Similarly, a bank account supplied did not show any wages going into it or direct debits coming out.

When gardaí contacted his employer, she refused to give any details of the cleaning business in which he was allegedly employed or to provide relevant Revenue forms.

The man claimed in his High Court proceedings the Minister erred in law in applying an incorrect standard of proof.

He had been required to disprove allegations of fraud and/or abuse of rights “to an unrealistic standard of proof akin to beyond a reasonable doubt”, he said.

Among other things, he also claimed information obtained by gardaí during their investigation had been held back from him and that there was not a proper investigation of his residency here over the previous two-and-a-half years.

Mr Justice Barrett found the Minister has the right to restrict the use of free movement rights under EU law in circumstances of abuse of rights.

The applicant at no stage made any meaningful effort, including during the court hearing at which he represented himself, to explain the inconsistencies or dispute the facts identified by the Minister, he said.

Freedom of movement of EU nationals is “among the greatest of the many great, and too often undersung achievements of our wonderful EU,” he said.

It has been “constructed through law, can only be realised in accordance with law, and must be duly guarded by those tasked with policing/upholding the law”.