Fisherman claims garda struck him ‘three or four fast ones’ 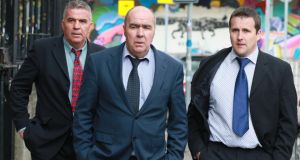 Martin and Pat O’Donnell with Patrick Coyle pictured outside the Four Courts during their High Court action for damages. Photograph: Courts Collins

A fisherman has told the High Court he suffered “three or four fast ones” to the face from a Garda using closed fists and wearing leather gloves during a protest against the Shell gas refinery in Co Mayo.

This happened as he went to aid a neighbour who was struck by the same Garda, Patrick O’Donnell said.

A Garda video recording of the protest was played to the jury on the second day of the civil actions for damages by Mr O’Donnell and two other local men over alleged assaults on them by gardaí during the protest between 7.30-9am on January 19th 2007.

The recording begins about 7.38am and stops around 7.43am before resuming about 7.50am. Just after 7.38am, the Garda doing the recording, named as Garda Greg Burke, says there are 35 gardaí present and “it’s peaceful so far”.

He notes there is a US film crew present and remarks “we can expect a bit of action”, “back to the same old rubbish” and “Willie Corduff will stage a show for us”.

When the recording resumes at 7.50am, Garda Burke says “peace has been restored” and “we have moved on from the skirmish”.

The recording was played in the actions by Patrick O’Donnell and his brother Martin, both fishermen with addresses at Porturlin, Shore, Ballina; and Patrick Coyle, a farmer, Barnatra, Ballina against the Garda Commissioner and State. All three cases are being heard together before Mr Justice Paul McDermott and a jury.

In evidence, Patrick O’Donnell said Garda Burke laughed when Mr O’Donnell showed his face to the camera after the alleged assault on him and said: “Are you happy, I’m all bursted”. Garda Burke did not seem interested in his injuries, he said.

There were about 100 people involved in the protest held as a convoy of workers and others were heading towards the Shell refinery at Bellanaboy, he said.

Mr O’Donnell said he was assaulted when he went to help Patrick Coyle after Mr Coyle was struck on the head by a Garda later identified as Garda Peter Lee.

As he went to help Mr Coyle, two gardaí held his hands while Garda Peter Lee gave him “three or four fast ones” to the face, Mr O’Donnell said.

In the recording, Mr O’Donnell is seen looking into the camera and saying: “Hey Greg, take a look at my face.” He also says: “I’m bursted, I have a tooth loose, what kind of effing men have you down here?”.

In his evidence, Mr O’Donnell said he has been a fisherman since the age of 14, two of his sons are also fishermen and most people in the local community fish, farm or emigrate. He remains concerned about the effects of the Shell project on the environment and the local fishing industry.

Asked why he was addressing the Garda camera on January 19th, 2007, Mr O’Donnell said he was angry and shocked over what happened and has been eight years “trying to get justice”. He suffered three broken ribs during another protest and another case was pending about that, he added.

Asked about another remark on camera: “I have the number”, Mr O’Donnell said that was a reference to taking the number of the Garda who hit him, later identified as Garda Peter Lee.

Under cross-examination, Colm Smyth SC, for the defendants, said their evidence would be that gardaí had only engaged with protesters when they tried to break the white line on the road and cross into the section of road used by the convoy.

Garda Marvin Lee, son of Garda Peter Lee, would say he was pulled by protesters into the crowd and Patrick O’Donnell had grabbed him by the front of his jacket which resulted in his number being torn off, counsel said.

Marvin Lee feared he would be pushed over the bridge, a 20 foot drop, and the evidence would be his father, Garda Peter Lee, and another Garda went to aid Marvin Lee, counsel added.

Mr O’Donnell said he had not touched either Garda Marvin Lee or Garda Peter Lee and did not see another protester trying to headbutt Garda Peter Lee.

Mr O’Donnell said his involvement in the anti-Shell protests was always peaceful and he never tried to hurt anyone. He said he had faced charges for obstruction and was convicted of obstruction.

Asked about an incident in which he alleged he and a crewman were held by four men at gunpoint on his boat in June 2009 before it was sunk, Mr O’Donnell said that incident did happen and he reported it to gardaí.

No one was ever brought to account and it was a very frightening experience, he said.