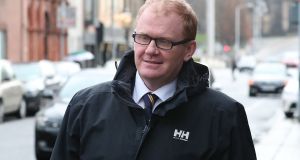 A Fine Gael TD will say he was “astonished” that fellow party member and Senator Paudie Coffey is suing for defamation over a newspaper article, a High Court jury has been told.

Rossa Fanning SC said that will be part of Fine Gael TD John Paul Phelan’s evidence in the continuing action by Senator Coffey over the January 2016 article published in the Kilkenny People.

Senator Coffey claims the article was the main factor in the loss of his Waterford Dáil seat.

He is suing Iconic Newspapers, publishers of the paper, over the article which reported verbatim a press release from Mr Phelan describing a proposal to bring part of Kilkenny into the Waterford electoral area as “daylight robbery”. Mr Phelan said there was a “bloodthirsty” 18th century highway man in Waterford called “Crotty the Robber” and now “Coffey the Robber” was trying to do the same thing.

Senator Coffey says that was defamatory and the publisher denies this.

On Tuesday, his third day under cross examination by Mr Fanning SC, for Iconic Newspapers, counsel put to him the language used in the article was colourful comment in the context of other newspaper articles quoting colourful comments by local politicians about the Waterford/Kilkenny boundary issue.

Senator Coffey said other comments were part of political debate but the Kilkenny People article was far more pointed and alluded to some form of malpractice by him in his position as a junior environment minister at the time.

It defamed him and his family and was published without giving him the opportunity to respond before it was published, he said.

Counsel said he was not the first politician to be compared to fictional or historical characters.

He said Taoiseach Leo Varadkar is referred to as “Vlad” in the Phoenix magazine and there also was Co Roscommon politician Luke “Ming” Flanagan, and former Justice Minister John O’Donoghue, who was known as “Bull McCabe” after the central character in John B Keane’s play, The Field.

None of those politicians had sued, counsel said.

None of those people were called a robber, Senator Coffey responded.

Counsel suggested this was “part of the rough and tumble of politics” and, when Deputy Phelan gives evidence, he will tell the jury he is “astonished we are here”.

Senator Coffey said he has been in politics for 20 years through good and bad times.

“And never in my life have I experienced the type of headline in this article published at a vulnerable time in my career”.

Mr Fanning put to him he gave a completely different public explanation last month for the loss of his Dáil seat when he told the London Times it was due to the controversy over a catheterisation laboratory at University Hospital Waterford.

Senator Coffey said the laboratory issue contributed to the loss of his seat, as did the water charges controversy, but the “main factor” was the Kilkenny People article.

He accepted there had been a ten per cent drop in the Fine Gael vote in 2016 nationally and locally in Waterford from 2011. He also agreed he had the disadvantage that Fianna Fáil’s successful candidate in Waterford, Mary Butler, came from his own area of Portlaw.

Earlier, he said he was “factually correct” in comments he made in a local radio interview about the boundary commission review months before the Kilkenny People article.

He disagreed he gave the impression in the interview he was responsible for the review.

1 Coronavirus: Almost 60 new cases recorded in Italy as two die
2 Archbishop: Sex abuse of women by L’Arche founder ‘reprehensible’
3 Ryanair’s Michael O’Leary under fire for comments on Muslim men
4 The view from Clondalkin: If Sinn Féin don’t get in, ‘there will be marches’
5 Drug dealer loses codes for €53.6m bitcoin accounts
Real news has value SUBSCRIBE