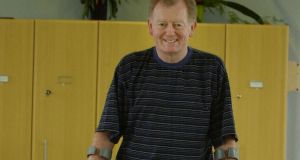 Dublin publican Charlie Chawke pictured recovering from surgery in 2003 following his shooting by armed raiders. Frank Ward, who was jailed for 20 years for his role in the incident, has made several court applications seeking his release. Photograph: Bryan O’Brien

A man serving a 20 year sentence arising from the shooting of publican Charlie Chawke has failed to get a High Court inquiry into his detention on grounds he is illegally detained in an “alien” county, Co Laois, where the people are “GAA supporters to a child”.

Frank Ward, detained since 2010 in the Midlands Prison, Portlaoise, and alleged his rights were breached due to being detained in “internal exile” in a county “culturally foreign and alien” outside the geographical jurisdiction of the original sentencing court in Dublin. This detention came as a “monumental culture shock” to him, he claimed.

In refusing an inquiry under Article 40 of the Constitution into the legality of his detention, Mr Justice David Barniville said the grounds advanced were “spurious” and “ummeritorious”.

There was “nothing unfair” or contrary to Mr Ward’s fundamental rights in an order transferring him from Mountjoy Prison to the Midlands Prison nothwithstanding the people of Co Laois may be “GAA supporters”, the judge said.

Nor was there any basis for complaints of unfair geographical distance from the applicant’s family as there were “excellent road and rail links from Portlaoise”.

The claim Mr Ward was internally exiled outside the geographical jurisdiction of the court that sentenced him, Dublin Circuit Criminal Court, has no merit, he ruled.

There was also “no basis whatsoever” for claims the detention in the Midlands Prison breached the applicant’s rights under the European Convention on Human Rights to liberty and security. Ward, aged in his sixties, of Knockmore Avenue, Tallaght, was sentenced in October 2007 for his role in an incident outside Mr Chawke’s restaurant and bar, The Goat Grill, Goatstown, Dublin, on October 6th 2003.

Mr Chawke was seriously injured in the shooting and his right leg was amputated five days later.

Ward was given two life sentences on charges of intentionally causing serious harm to Mr Chawke and robbery of €48,652 in cash and cheques.

The Court of Criminal Appeal in January 2012 quashed the life sentences and replaced them with sentences of 20 years on each count, to run concurrently from October 2003.

During his detention, Ward has made several applications seeking his release.

1 RTÉ receives complaint from union after ‘issue’ with spokeswoman’s accent
2 Fianna Fáil election candidate was disqualified from being company director
3 Clontarf tenant says her garden was ‘destroyed’ without warning by Irish Rail
4 RTÉ will not include Sinn Féin in second TV debate despite legal threat
5 Election 2020: Fine Gael and Fianna Fáil set to reveal spending plans worth billions
Real news has value SUBSCRIBE