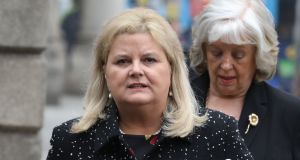 The president of the High Court has urged the Dáil to reconsider its refusal to enter a non-binding mediation of a claim for damages by former Rehab CEO Angela Kerins over her treatment by the Dáil Public Accounts Committee at hearings in 2014.

Mr Justice Peter Kelly made the comments on Monday when he re-entered Ms Kerins’s action against the Dáil and State with a view to her pursuing the second part of it, a claim for damages.

He was told by John Rogers SC, for Ms Kerins, that a parliamentary legal adviser, in response to a request from Ms Kerins’s lawyers last year to engage in a non-binding mediation, had indicated the issue whether she had any entitlement to damages raised important issues of principle which would have to be decided by a court.

Brian Kennedy SC, for the Dáil, said he would bring the judge’s urging that a “second look” be taken at the mediation request to the attention of his client.

Ms Kerins, the judge noted, has said she is willing to engage in mediation in the hope to end the litigation which she said has had a very adverse effect on her. She had said, apart from the distress and injury she has suffered, she has also experienced very substantial financial loss.

Her lawyers had sought non-binding mediation to resolve the issues in the context of the role of the Dáil in regulating its own behaviour and a public statement by the Ceann Comhairle acknowledging the wrong done to her, he said.

He considered there should be a “second look” at the mediation offer.

Mediation was a possible way of avoiding another “long and protracted” hearing and possible appeal and is a process much approved by the courts as a method of bringing about a resolution by consent between parties involved in litigation, he said.

If mediation is not embarked upon, the matter will go to trial.

Having been told of discussions on discovery applications by both sides and there may be agreement on discovery, he adjourned the proceedings to early March to facilitate that and for further case management.

As part of Ms Kerins discovery applications, she wants all minutes of the PAC and/or between individual members, whether in public or in private session, when it decided to commence its examination into payment of monies by the Rehab group.

The first module concerned whether the courts had jurisdiction to interfere with hearings before Oireachtas Committees.

In its judgment on that module in January 2017, a three-judge High Court was strongly critical of the PAC’s treatment of Ms Kerins but concluded, because of the constitutional separation of powers, the courts could not intervene.

Ms Kerins appealed to the Supreme Court which, in a landmark judgment, found the PAC acted unlawfully in its treatment of Ms Kerins in acting outside its terms of reference and of its invitation to Ms Kerins to appear before it.

It grated a declaration to that effect against the Dáil and said any further dispute between the sides, including about damages, should be decided in the first instance by the High Court.

It could not be assumed there was an entitlement to damages and any such claim raised “novel” issues of law, it said.

The second leg of Ms Kerins case involves claims for misfeasance in public office, breach of constitutional rights and damages. She wants substantial damages over her treatment before the PAC when she was questioned by some members about matters including her €240,000 annual salary and the salaries of other Rehab officials.

She has described her treatment as a “witch-hunt” and says it lead to an attempt by her to take her own life and significant financial loss, including of her annual salary, bonuses and company car with Rehab from the time of her resignation in 2014 to retirement age.