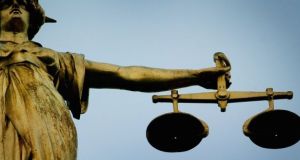 A cyclist who was injured when a Range Rover car rolled over his foot has been awarded just over €20,000 by the High Court after he was found 60 per cent responsible for the accident.

Pat Deegan, a bicycle shop director, had sued motorist Jennifer McPartlin over the accident near Eglington Road, Donnybrook, Dublin. Ms McPartlin, who was represented by her insurance company, denied the claim.

Mr Deegan (49), Anne Devlin Road, Rathfarnham, Dublin, was cycling to his bicycle business in Sandymount on May 18th, 2015.

He claimed Ms McPartlin’s Range Rover had exited Brookvale Road to Eglinton Road without warning, colliding with his bike as he waited at the edge of a yellow box for traffic to move on.

Her car then rolled over his foot causing a fracture to his left tibia and fibula. He later required surgery.

She claimed he had gone through a red pedestrian traffic light, which he denied.

She said she had slowly emerged from the junction to give herself a better view of oncoming traffic and that another driver had signalled her to come out.

She felt the impact with the bicycle and heard Mr Deegan banging on her bonnet.

Another cyclist told the court the lights were red and she had stopped to allow Ms McPartlin’s car come out.

Mr Justice David Keane said Ms McPartlin assumed, if the pedestrian lights were red, there would not be any traffic between the lights and the junction.

While understandable, this was incorrect and it “could not operate as an alternative for the strict requirement upon a motorist at a yield sign to keep a proper lookout for traffic, including bicycles, on the main road”, he said.

He was satisfied Mr Deegan broke the lights, preferring the evidence of the other cyclist who was “a disinterested witness”.

On the balance of probabilities, the judge found that Mr Deegan, having recklessly broken the traffic light, continued on to the Brookvale Road junction across which he had the right of way.

Ms McPartlin, who had looked to her right at the yield sign, had wrongly assumed it was no longer necessary to keep a proper lookout to her right because the lights were red, he said.

The parties had agreed the appropriate level of damages should be € 51,600 which Finbarr Fox SC, for Ms McPartlin, told the court meant a decree for Mr Deegan of € 20,640. Costs will be decided later.