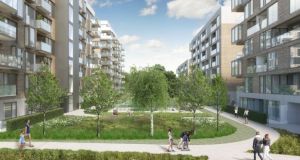 In separate proceedings, the board last June consented to an order quashing its permission to Crekav for a development (illustrated) of 657 apartments.

A developer has won its High Court challenge over An Bord Pleanála’s refusal of permission for a controversial development of 536 housing units on lands near St Anne’s Park in Raheny.

In a 125 page judgment on Friday, Mr Justice David Barniville upheld the challenge by Crekav Trading GP Ltd, part of Pat Crean’s Marlet group. He held that the board’s reasons for its September 2018 decision to refuse permission, and its reasons for disagreeing with its own inspector’s recommendation that permission be granted, were inadequate.

The matter of what specific orders should be made arising from his conclusions will be decided on a later date after lawyers for the sides have considered the judgment.

Crekav sought permission for the development under the 2016 Planning and Development (Housing and Residential Tenancies) Act 2016, the fast track process for strategic housing developments.

Its proposal was for construction of 536 residential units, 104 houses and 432 apartments, and ancillary works, on a site which previously formed part of the lands of St Paul’s College, a boys secondary school, in Raheny. The proposed site was bound to the east, south and north by St Anne’s Park.

The board had in 2018 granted permission for the proposed development but its decision was challenged, in three separate sets of proceedings by Clonres CLG, a local residents group; environmentalist Peter Sweetman; and environmentalist John Conway and the Louth Environmental Group. The board ultimately conceded those proceedings after accepting there was an error in how it recorded the test applied by it in carrying out an Appropriate Assessment (AA) under the EU Habitats Directive.

Mr Justice Barniville subsequently remitted the matter to the board for reconsideration. Having reconsidered the matter, the board had in September 2018 made a fresh decision refusing permission for the proposed development for reasons relating to screening for an AA and lack of adequate qualitative analysis in respect of the light-bellied Brent goose. Crekav challenged that decision by the board on various grounds.

In his judgment, Mr Justice Barniville found in favour of the developer on the ground of adequacy of the board’s reasons for its decision. He rejected its grounds concerning the alleged powers of the board to seek further information for an applicant for permission under the strategic housing act and the board’s treatment of “mitigation” matters in its decision.

Last June, in separate proceedings, the board consented to an order quashing its permission to Crekav for a development of 657 apartments on the St Paul’s lands. That consent order was made on the basis the board had not adequately addressed requirements of the Habitats Directive in relation to an AA of the impact of the development on feeding grounds of the light-bellied Brent goose and other protected bird species in Dublin Bay.

That planning application was remitted to the board to be determined “in accordance with law” from the time the board received a report in December 2019 from the chief executive of Dublin City Council (DCC). The DCC report recommended permission be refused for reasons including a Natura Impact Statement from the developer had not demonstrated the development would not impact on the populations of protected Brent goose, the black-tailed godwit or curlew of Dublin Bay.