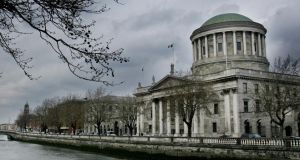 The three-judge High Court, comprising the President of the High Court, Mr Justice Nicholas Kearns, Ms Justice Marie Baker and Ms Justice Caroline Costello found there was no genuine prospect the somatic process would lead to the birth of a live baby.

A young pregnant woman declared clinically brain dead more than three weeks ago may be taken off life support because there is no genuine prospect of her baby being born alive, a three-judge High Court has ruled.

Due to the woman’s rapidly deteriorating condition, the prospect for the unborn is “nothing but distress and death”, the court said.

After giving the court’s ruling, the President of the High Court, Mr Justice Nicholas Kearns, said he was “grateful” to be told there will be no appeal to the Supreme Court.

The fact there will be no appeal means the woman’s family and partner may proceed with her burial.

It is understood life support in the case is likely to be withdrawn within the next 24 hours.

Mr Justice Kearns, sitting with Ms Justice Marie Baker and Ms Justice Caroline Costello, said the court was awarding costs of the case to the woman’s family, and to the lawyers representing the interests of the woman and unborn, as it had raised issues of “great public importance”.

The woman is 18 weeks pregnant and was at 15 weeks gestation when she was declared clinically dead on December 3rd at a Dublin hospital as a result of a brain trauma suffered at a hospital outside Dublin on November 29th, two days after she was admitted there complaining of severe headaches.

Due to concerns by doctors at the Dublin hospital about the legal implications of her pregnancy, arising from the State’s obligation to vindicate the right to life of the unborn in Article 40.3.3. - the 1983 anti-abortion amendment to the Constitution - she has remained on somatic life-support treatment.

Her father, supported by her partner and extended family, had applied to the court for orders stopping the somatic treatment so they could bury her “with dignity”. Her father said she no longer looked like his daughter and the eldest of her two young children had been very distressed when she saw her mother last week.

Of seven doctors who gave evidence to the court earlier this week, none argued the treatment should continue or that there was any realistic prospect of her baby being born intact even if the treatment continued. The court also heard the woman’s condition is deteriorating, her brain is rotting, she has an open head wound and several infections and there were concerns about the effect of this, and the drugs being administered to the woman, on the unborn.

Giving the court’s judgment, Mr Justice Kearns paid tribute to the woman’s father, partner and family for their “immense courage and fortitude” in dealing with the catastrophe that had befallen them and which was compounded by having to come to court. This was an “enormous family tragedy” involving a young woman in the prime of life who was undoubtedly looking forward to the successful outcome of her pregnancy.

This was not a case where the woman had ever indicated she wanted an abortion, he said. On the contrary, she had apparently posted a scan of her unborn on her Facecbook page to share her pleasure and excitement about her pregnancy. From the available evidence, the court believed she would “have fought long and hard to bring her unborn child to term”.

That intention fell well short of any expression by her that her present predicament and that of her unborn child should continue in the direction in which it is presently heading, the judge stressed. The entire medical evidence “goes one way only” and that was to establish the prospects for a successful delivery of a live baby in this case “are virtually non-existent”.

The medical evidence clearly established that early gestation cases have a much poorer prognosis for the unborn child than those cases where brain death of the mother occurs at a later stage, usually improving after 24 weeks, he said.

Based on the evidence, the court found the woman suffered brain stem death on December 3rd last

The court was satisfied it is in the best interests of the unborn child to authorise, at the discretion of the medical team treating the woman, the withdrawal of the somatic life support in this “tragic and unfortunate” case.

He said the unborn in this jurisdiction has the constitutional guarantee of a right to life. While the common understanding of Article 40.3.3 was that it was intended to prevent abortion, and abortion was not at issue here, the provision in its plain and ordinary meaning may also be seen in simple terms as acknowledging the right to life of the unborn which the State, as far as practicable, shall by its laws defend and vindicate.

The court rejected arguments on behalf of the unborn that the Irish language text of Article 40.3.3 meant the State had an obligation to vindicate that right to life “as far as is possible”. The Supreme Court had said the obligation meant the protection must be not futile, impractical or ineffective, it noted.

In this case, the court was satisfied a necessary part of vindicating the unborn’s right to life was to enquire into the practicality and utility of continuing life support measures.

“This unfortunate unborn has suffered the dreadful fate of being in the womb of a mother who has died, and in which the environment is neither safe nor stable, and which is failing at an alarming rate.”

The court accepted the evidence of the medical witnesses that, from a medical viewpoint, normal bodily parameters are maintained within “extraordinarily fine limits”, and that in this case there was “no real prospect of maintaining stability in this unique environment, having regard to the degree of infection, the fluctuating temperatures in the body of the mother, the difficulty in maintaining a safe blood pressure and the amount of toxic medication being administered to the mother which is not licensed for pregnancy.”

The somatic support being provided to the mother “is being maintained at hugely destructive cost to both her remains and to the feelings and sensitivities of her family and loved ones”. The mother’s condition was failing at such a rate and to such a degree “it will not be possible for the pregnancy to progress much further or to a point where any form of live birth will be possible.”

As one of the medical witnesses had said, while the unborn child is not yet in distress, “it is facing into a ‘perfect storm’ from which it has no realistic prospect of emerging alive.

“It has nothing but distress and death in prospect.”

Given that finding, it stressed this was not a case where the court’s view was influenced by any consideration, if the unborn child was born alive, it would be impaired to a greater or lesser degree.

The court also believed maintenance of the somatic support would deprive the mother of dignity in death and subject her father, her partner and her young children to “unimaginable distress in a futile exercise which commenced only because of fears held by treating medical specialists of potential legal consequences”.

It noted highly experienced medical practitioners, with the best interests of both mother and unborn in mind, did not believe there was any medical or ethically based reason for continuing with a process which Dr Peter McKenna, a consultant obstetrician at Dublin’s Rotunda Hospital, had described as “verging on the grotesque” on the particular facts of this case.

The court also stressed it was not impressed by arguments the woman has no right to dignity arising from her having been declared brain dead. The requirement to vindicate the right to life of the unborn does not mean the court disregards the mother’s right to retain in death her dignity and receive proper respect for her autonomy with due regard to the grief and sorrow of her loved ones and their wishes, it said.

“It is a deeply ingrained part of our humanity and may be seen as necessary both for those who have died and also for the sake of those who remain living and must go on. The court therefore is unimpressed with any suggestion that considerations of the dignity of the mother are not engaged once she has passed away.”

When the mother who dies is bearing an unborn child at the time of her death, the rights of that child, who is living, must prevail over the feelings of grief and respect for a mother who is no longer living, the court said.

The question then became how far the court should go to vindicate that right. The issue was whether this unborn had a realistic prospect of being born alive and the court accepted evidence there was no such prospect in this case.

Lawyers for the HSE had not opposed the woman’s family’s application for declarations that would allow her be legally taken off the somatic treatment. The HSE said it considered ceasing the treatment was not unlawful on the basis of evidence indicating there was no reasonable prospect the unborn would survive.

Lawyers instructed to represent the interests of the woman argued the treatment should continue. It was argued, given she was a full-time mother devoted to her children, she would have wanted to allow every opportunity for the unborn to get to a position where it would be viable.

The evidence indicated that would involve the woman remaining on the somatic treatment for at last another ten weeks.

Lawyers representing the interests of the unborn also argued, given the woman is clinically dead, the unborn’s right to life surpassed her right to a dignified death.

It was for the court to decide whether the evidence indicated a genuine prospect of the baby being born alive, it was submitted.