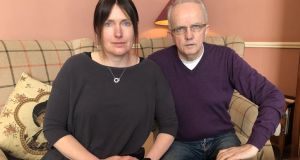 Ann Keane and Patrick Halpin at their home Aberdeen Lodge which is also a guest house in Sandymount, Dublin. File photograph: Bryan O’Brien

A couple who last year fought an attempt to repossess their bed and breakfast in Sandymount, Dublin, have brought a High Court challenge to a decision to impose commercial rates on the property which they say is primarily their family home.

Ann Keane and Patrick Halpin came to public attention last year when a receiver got a possession order over the 16-bedroom Aberdeen Lodge at Park Lane over default on a €25 million debt which had been acquired by Kenmare Property Finance. It followed seven years of litigation, ending up in the Supreme Court which found against the couple.

The couple resisted the repossession and engaged in what receiver Paul McCann’s lawyer called a high-profile media campaign to seriously and wrongly distort what had happened in the courts over the years.

An application to jail them for contempt over the refusal to hand over possession is still pending before the courts.

In the meantime, in May last year, the couple were told their property was liable for commercial rates. They say it should be exempt as it is mainly their family home for them and their two children.

Last month, in a separate case against them by a Dublin City Council rate collector, the High Court found the couple were liable for a €75,000 rates bill for 2013-17 despite their contention the property was not rateable. The court noted a turnover of €537,000 for 2016 from the B&B.

The couple had separately brought judicial review proceedings seeking to quash the decision to revoke a previous decision making the premises exempt.

On Thursday, Mr Justice Charles Meenan began hearing the challenge to the decision by the Valuation Commissioner.

They claimed, among other things, the decision was arbitrary, outside the commissioner’s powers and in breach of their European Convention rights. The commissioner denies the claims.

Owen Hickey SC, with Proinsian Ó’Maolchalain, for the couple, said that until 2012 Aberdeen Lodge had been operated in the name of a company, Elektron Holdings, which went into liquidation. The premises had been registered under the company name with the tourism authority and had paid rates. Following liquidation and closure of the premises, that registration lapsed.

Subsequently, Ms Keane began operating it as a B&B and a request was made in 2017 to have it revalued on the grounds it was primarily a “domestic premises” and therefore ought not to be rated under the 2001 Valuation Act.

A Valuations Office revision officer, who inspected the lodge, recommended it not be rated. The office’s revision manager confirmed that recommendation and in March 2019 decided it should be excluded.

In May 2019, the same manager decided to revoke that decision and make it rateable. It was claimed the earlier decision to exempt the property was made in error.

Mr Hickey said it was argued by the Valuation Commissioner’s head of valuation services, Declan Lavelle, the error occurred as a result of a misunderstanding that its deregistration with the tourist authority automatically made it exempt.

Counsel said the Valuation Commissioner had said the new revision took place to ensure equity and uniformity in the valuation system.

Counsel said the moves to revise the March decision and to make it rateable all took place on the same day. There had been no error in March, he said.

It was “crystal clear” in March to the revision manager it was primarily a family home and remained crystal clear in May, he said.

There was no basis under the law for the May revision because there was no material change of circumstances as required by the Valuation Act for such a revision, he said.

Where the property is used as a family home, even where part of it is used as a B&B, the law provides that it is not rateable, he said.