Collapsed Hutch murder trial transcripts to be given to GSOC 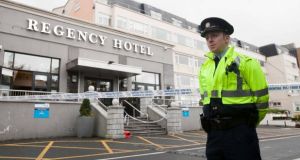 Patrick Hutch’s trial over the murder of David Byrne at the Regency Hotel in Dublin in 2016 collapsed. Photograph: Collins

The High Court has ordered the DPP to provide transcripts to the Garda Siochana Ombudsman Commission (GSOC) of the collapse of Patrick Hutch’s murder trial.

The trial collapsed following of the death of the senior investigating garda in the case.

Mr Hutch was accused of the murder of David Byrne (34) during a boxing match weigh-in at Dublin’s Regency Hotel on February 5th, 2016.

Mr Hutch (26) of Champions Avenue, Dublin 1, had pleaded not guilty to murder and to possession of three assault rifles. He had been held in custody after failing to get bail.

He was freed on February 20th when the DPP’s counsel told the Special Criminal Court the prosecution “was not in a position to lead evidence on a number of evidential topics” and a “nolle prosequi” ending the case was being entered.

Following that collapse of the trial, the GSOC began an investigation into the matter under powers provided to it by the 2005 An Garda Síochána Act.

In an application before Mr Justice Anthony Barr on Friday, the GSOC sought orders for the release of the trial and bail hearing transcripts and exhibits.

The application was made against the Special Criminal Court, where the trial took place.

The Garda Commissioner, the State and Mr Hutch were notice parties. The DPP takes on the role of the respondent when an application is made in a case such as this.

Remy Farrell SC, for the GSOC, said his client met the legal test for establishing an interest in the trial proceedings. The rules of the Special Criminal Court, which are “relatively terse”, do not relate to orders on transcripts, he said.

During the trial, identification evidence was offered by two gardaí which was ruled admissible following legal argument during the case. The trial was due to recommence in February 2018 when “certain tragic events occurred resulting in the death of a senior garda,” counsel said.

Detective Superintendent Colm Fox, senior investigator in the case, was found dead at Ballymun Garda station on February 10th, 2018. His official firearm was recovered at the scene. Foul play was not suspected.

The Garda Commissioner referred the matter to the GSOC but it was complicated by the fact there were ongoing criminal proceedings and it was only after the entering of the nolle prosequi a year later that the formal investigation began.

Mr Farrell said the GSOC was looking for the trial transcripts so that it has the best evidence available for its investigation. It was also seeking a permissive order in relation to the exhibits in the case such as TV footage allowing the GSOC to take up the exhibits should it be required.

The court heard the DPP wanted to hold off on the issue of exhibits.

If the GSOC is unable to understand part of the transcript without the exhibits, there should be no difficulty in taking them up, it was stated. Lawyers for the notice parties had no objection to the GSOC application.

Mr Justice Barr was satisfied it was appropriate to grant the reliefs sought by the GSOC in order that it can carry out a full and proper investigation.

As well as ordering the release of the trial transcript, he gave the GSOC permission to access and, if necessary copy, the exhibits and also ordered release of transcripts of the recording of the bail application hearing.

He gave liberty to apply to the court should there be any disagreement about access to the exhibits.