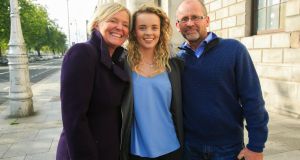 A High Court judge has said situations such as that experienced by students like Rebecca Carter, whose Leaving Cert exam points were wrongly totted up, “cannot be repeated”.

Mr Justice Richard Humphreys said the current system where Leaving Cert exams are reviewed by the State Examination Commission (SEC) is “highly unfair” to Leaving Cert students and had caused “untold stress” to Rebecca and others who go through the appeal system.

Rebecca earlier this week started her chosen course of veterinary medicine at UCD after the judge last month upheld her challenge over the handling of her appeal by the SEC.

On Wednesday, the judge issued his full written judgment on the case.

He suggested an “intensified process of coordination” in which central government could play a “facilitative role” might assist in preventing similar problems in the future.

People should not think Ms Carter’s case had “an entirely Hollywood ending”, he stressed, noting she had lost the initial crucial first few weeks of the course.

She had missed out, not just because of a mistake in the SEC’s process, but because the correction of the error failed to restore her entitlement to take up a place in time for the start of the course.

An appeals system that does not allow applicants to take up their courses until one and a half months after the start of the academic year is “manifestly not fit for purpose,” he said.

In fairness to the SEC, not all of the problems caused by the tight time frames and lack of coordination by various independent agencies in the education sphere are entirely the fault of any one actor, he said.

Ms Carter (18), Ardcolm Drive, Rectory Hall, Castlebridge, Wexford, had sued the SEC over its decision not to re-check her points score in time to allow her to obtain a place in veterinary medicine.

Late last month, Mr Justice Humphreys ruled the commission must rectify an error in the totting up of Rebecca’s Leaving Certificate marks before UCD closed its admissions for 2018.

Had her points been correctly added up she would have achieved an extremely high mark that would easily have qualified her for a place at the UCD course, he said.

Represented by Micheal P O’Higgins SC, with Brendan Hennessy BL and instructed by solicitor Eileen McCabe, Rebecca had repeated her Leaving Certificate and her result showed she received 554 points, six short of the required number for veterinary medicine at UCD.

The points for the course had dropped to 555 in the second round offer which left her only a point short.

Dissatisfied that the result in her business exam fairly reflected her exam performance, she sought a review.

It was discovered her points total had been wrongly totted up and, had that not occurred, she would have exceeded the points required for the veterinary course.

After her marks were reviewed, her business studies grade was increased from a H2 to a H1 grade, and she was offered a place in what was her first choice college course.

The judge also awarded Ms Carter the costs of the action.

In his written judgement, he said it was nice to hear the SEC was anxious to be seen publicly to wish Rebecca well, particularly as it has defended the action on foot of arguments including that her proceedings were self-serving.

The SEC had also raised the issue of possible costs consequences of taking her action, he noted.

“Presumably, in making its latest intervention, the SEC had in mind Rebecca’s averments as to the severe stress this matter had caused her,” he said.