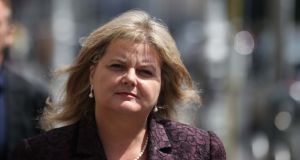 Former chief executive of the Rehab Group, Angela Kerins, who was exposed to questions about the charity which inferred impropriety, lack of transparency and ‘even illegality’, the High Court was told on Thursday. Photograph: Collins

A 2014 hearing of the Dáil Public Accounts Committee into payment of public monies to the Rehab Group was “truly an inquiry into the charity sector” and the earnings of people in that sector, the High Court has been told.

“If you were in the way of that, the PAC steamroller would knock you down,” John Rogers SC said.

Mr Rogers, with Siobhan Phelan SC, was continuing his opening of a hearing to decide the jurisdiction of PAC to conduct such hearings.

That issue, with implications for future PAC inquiries, is central to former Rehab chief executive Angela Kerins’s action against PAC and the State, in which she is seeking damages for alleged personal injuries and reputational damage based on claims PAC conducted itself unlawfully, showed bias towards her and was guilty of misfeasance in public office.

Ms Kerins had been publicly exposed by PAC, “with no notice whatever”, to questions about the charity which inferred impropriety, lack of transparency and “even illegality”, he said.

He said committee chairman John McGuinness failed to protect Ms Kerins or ensure hearings of February 27th and April 10th, 2014, concerning Rehab were conducted within parameters of a notice served on her on February 18th.

Members of the committee had “condemned” Ms Kerins and another former Rehab chief executive Frank Flannery as a result of questions and comments made during both hearings, he said.

Ms Kerins, who did not attend the April 10th meeting due to ill-health, was “deeply affected” by a line of questioning at that meeting which was “designed” to get answers from other Rehab officials that was going to discredit her and Mr Flannery, he said.

PAC denies it acted outside its jurisdiction and pleads Ms Kerins voluntarily agreed to attend before it on February 27th.

Ms Kerins was in court on Thursday when Mr Rogers indicated his side may play a video recording next week of part of the April 10th hearing to show a “most egregious abuse of power” by PAC.

Mr Rogers said that, during the seven-hour session on February 27th, 2014, PAC members persisted in questioning Ms Kerins about “entirely private” matters such as salaries and payments, despite being told Rehab was a private and not a public body.

Less than half of the group’s income comes from public funds and the “trigger” for PAC’s entitlement to engage in any examination “had not been pulled” as there was no audit by the Comptroller and Auditor General.

While PAC cannot make findings of fact, it was clear members were reaching “conclusions” and making “statements” during the hearings, he said.

Mr McGuinness and other members made comments that effectively accused Ms Kerins of not being in compliance and presented her as being unco-operative, counsel said.

He had wished Ms Kerins a speedy recovery but also said it was “deplorable” she was not present and made “judgmental” comments, including that the “game of cat and mouse” should be over in the interests of the charity sector.

The Rehab delegation to that meeting was “forced”, for “compelling public relations reasons”, to report to PAC on the workings of an “entirely private” enterprise, he said.

While Ms Kerins attended on February 27th in a voluntary capacity, Mr McGuinness later publicly said she had not done what PAC required, with the implication it was entitled to require her to do something when it was not, counsel said.

Mr Rogers said the position was “do as I say even though I have no authority”.

Ms Kerins has claimed she felt she must attend before the committee on February 27th to protect the Rehab group, because of a “media storm” concerning the group arising, she claims, from statements by members of PAC.

After that hearing, she became so overwhelmed by the conduct she reached a point by March 14th, 2014, where she felt the solution to the problem was her death and she tried to end her life, she said.