Conor McGregor appears in court charged with assaulting a man 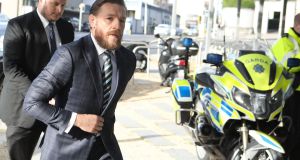 Mixed martial arts fighter Conor McGregor has appeared in court charged with assaulting a man in a south Dublin pub earlier this year.

The fighter attended Dublin District Court in the Criminal Courts of Justice on Friday wearing a navy pattern suit and accompanied by several minders.

There was a brief commotion from others in court when Mr McGregor’s name was called in the list just after 10.30am.

Mr McGregor’s solicitor Michael Staines confirmed to judge Marie Keane that his client was in court and is currently on bail.

Mr Staines applied for an adjournment and investigating Garda Jason O’Carroll from Crumlin Garda station said there was no objection.

The garda said disclosure in the case is still outstanding and that it will include CCTV footage.

The judge directed that all disclosure be made to Mr Staines.

She remanded Mr McGregor on continuing bail to November 1st, 2019.

The accused will have to request a trial date or enter a plea on that day, she said.