Vegetation attached to cyclist who was ‘driven’ through hedge 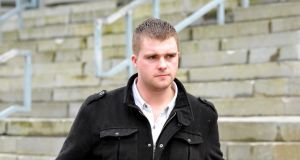 Shane Fitzgerald has pleaded not guilty to the charge of dangerous driving causing the death of Paudie O’Leary on July 1st, 2012.

Pieces of vegetation were attached to the body of a cyclist who, it has been alleged, was “driven” through a hedge into what was described yesterday as a deep gully on the Gneeveguilla to Killarney road.

The clothes of the middle-aged man were blood stained, there was glass in his black cycling shorts, and vegetation was present in the mouth, the pathologist who carried out the post mortem detailed at the Circuit Criminal Court in Tralee.

Paudie O’Leary was aged 42 when he died from brain swelling and haemorrhage and upper spinal cord injuries due to a road traffic collision, assistant State Pathologist, Dr Margot Bolster, concluded at the third day of a trial of a 22-year-old man who denies dangerous driving causing death.

Shane Fitzgerald, of Knockeen, Knockduff, Meelin, Newmarket, Co Cork, has pleaded not guilty to the charge of dangerous driving causing the death of Mr O’Leary at Scrahanfadda, Gneeveguilla on July 1st, 2012.

The prosecution claim Mr Fitzgerald was driving a dark grey Land Cruiser on the date and that he had left Killarney at 5 am after socialising until the early hours. They allege his vehicle collided with Mr O’Leary and that he left the scene. The vehicle has never been found.

In her evidence of carrying out the post mortem on the body at Kerry General Hospital on July 2nd, the pathologist said Mr O’Leary had been wearing a yellow oil skin and black Italian-made cycling shorts. The left foot was wearing a laced runner, the right foot was “unshod”.

Detailing an extensive list of “external injuries” , Dr Bolster said the right ear lobe had been “partially torn off” and she listed 30 separate bruises or abrasions to the right leg, 10 to the chest and abdomen, six to the head and neck and seven to the right forearm and hand. There were no drugs and or alcohol in his system.

There was brain swelling and contusion and the injuries were “mostly “confined to the right-side of body and they included a fractured collar bone and laceration of the ear robe, “in keeping with an impact with a motorized vehicle”, the pathologist said.

The injuries to the head and neck were due to a fall off a bicycle into the ditch, said the pathologist.

Summarising, the cause of death was brain swelling and haemorrhage and upper spinal-cord injuries “due to a road traffic collision”, Dr Bolster concluded.

The trial in front of a jury of 11 and presided over by Judge Thomas E O’Donnell resumes on Tuesday.