Patrick Quirke has no previous convictions and is not suspected of other crimes, murder trial told 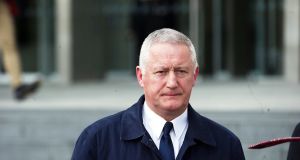 The injuries to Bobby Ryan’s body were not caused by debris falling on the skeleton when gardaí removed the concrete lid covering the tank in which the body was found, a senior garda has told the Central Criminal Court.

The trial of Patrick Quirke also heard that the accused man had no previous convictions and was not suspected of any other crimes.

Chief Superintendent Dominic Hayes was answering questions in relation to the investigation from when Mr Ryan went missing in 2011 to the discovery of his body in 2013 and the opening of the murder trial in January 2019.

Farmer Patrick Quirke (50) of Breanshamore, Co Tipperary has pleaded not guilty to the murder of Mr Ryan, a part-time DJ known as Mr Moonlight.

Mr Ryan went missing on June 3rd 2011 after leaving his girlfriend Mary Lowry’s home at about 6.30am. His body was found in an underground run-off tank on the farm owned by Ms Lowry and leased by the accused at Fawnagown, Tipperary 22 months later in April 2013.

The prosecution has claimed Mr Quirke murdered Mr Ryan so he could rekindle an affair with Ms Lowry (52).

In wide-ranging cross examination, Chief Supt Hayes told defence counsel Lorcan Staines SC that Ms Lowry told gardaí that she gave the accused a cheque for €50,000 but when gardaí investigated they discovered the cheque was for €20,000.

He also agreed that gardaí investigated whether Mr Quirke went to the Heritage Hotel in Co Laois on June 3rd 2011, the day Mr Ryan went missing. They found that both Mr Quirke and his wife Imelda arrived at the hotel and stayed there for two nights, spending over €600.

Mr Quirke’s phone records showed that his phone pinged off masts in Portlaoise from 1.56pm on June 3rd until 4.50pm on June 5th 2011.

Mr Quirke, he further agreed, has no previous convictions and was not suspected of involvement in any crime. He was previously charged with two burglaries of Ms Lowry’s home and with possession of a key but the DPP directed that gardaí withdraw the charges.

Going through the investigation, Chief Supt Hayes also agreed that gardaí discovered that the last time Mr Ryan’s phone pinged a mast was at 10.19am on the day of his disappearance.

In July 2011 the investigation team requested a technical examination of Mary Lowry’s home but the job was not done until after the body was discovered. Mr Staines suggested this was a “systems failure” but Chief Supt Hayes said there may have been no reason to do it, noting it was a missing person inquiry at the time.

When Mr Ryan’s body was discovered the chief superintendent went to the scene and looked into the tank. From his view he thought the body was clothed and was surprised when he was later told that it was naked but for a wrist watch.

Mr Staines asked him if, given the same scenario tomorrow, he would have consulted an entomologist at the scene when he saw flies on the body. He said he wouldn’t and added that would be a matter for a pathologist. He said he didn’t know of any entomologist working in Ireland.

Mr Staines asked if gardaí had been “badly let down” by then Deputy State Pathologist Dr Khalid Jaber who did not go to the scene despite being requested. Chief Supt Hayes said the pathologist not being present had no negative impact on the examination of the scene.

He said it was more the exception than the rule for pathologists to attend scenes and the best person to assist in removing the body was Detective Garda John Grant of the Scenes of Crime Unit who advised throughout the process.

The investigation team decided that before removing the body they would have to remove a concrete slab that covered most of the tank. They did so with a mechanical digger.

Chief Supt Hayes was present for that process and told Mr Staines that while “minor debris” fell when the slab broke, no large pieces of debris or concrete fell on Mr Ryan.

When Mr Staines asked him why he didn’t mention any of this in his statement he said it was not possible to anticipate questions that may arise during a prosecution. He said he was sure Mr Ryan’s body was not injured during the removal other than the fact that his arm was detached when the body was lifted onto a sheet on the ground.

He said again that no injuries occurred due to the lid being removed and added that it was “testament to the manner of the removal” that the detachment of the arm was the only damage done to the body.

Pointing to a photo of the scene taken following the removal, he said the lid sat on a sheet of corrugated iron and was reinforced with steel bars which, he said, “prohibits pieces of large debris falling on Mr Ryan”.

Mr Staines suggested there was another systems failure when fingerprints taken from Mr Ryan’s van in 2011 were not tested against the accused man’s prints or those of the Ryan family until earlier this year.

Chief Supt Hayes said those prints should have been tested and responsibility for that lies with the fingerprint section at Garda headquarters.

Mr Staines also asked the chief superintendent about Ms Lowry’s phone which was examined in 2011 but gardaí were unable to download its contents and so it was given back to her. Mr Staines asked if, with hindsight, it would be of assistance to the jury to see the contents of text messages between Ms Lowry and Mr Ryan in the lead up to his disappearance. The witness said he was uneducated in information technology and was not in a position to answer the question.

The chief superintendent agreed that it was “not ideal” that people who searched the farm at Fawnagowan in 2011 as part of the missing person investigation did not make statements about the search until 2013, after the body was recovered.

Mr Staines will continue cross examining the witness on Friday in front of Justice Eileen Creedon and a jury of six men and six women.

1 Irish health officials to ramp up precautions against coronavirus
2 Woman in her 30s arrested after man fatally stabbed in Co Dublin
3 Coronavirus: Tenerife hotel in quarantine after tourist tests positive
4 Graduates 'not well-equipped' for future workplace
5 McDonald says SF meetings not ‘an affront to democracy’
Real news has value SUBSCRIBE