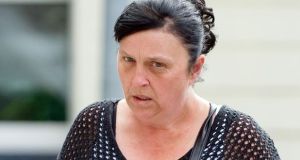 Paula Farrell (47) has pleaded not guilty to murder but guilty to the manslaughter of Wayne ‘Quilly’ McQuillan (30) at her home on January 1st, 2014. Photograph: Collins.

It is “abundantly clear” that a mother of three intended to cause “at least serious injury” to her partner when she picked the biggest knife from a knife block and stabbed him four times with it, the Central Criminal Court has heard.

In his closing address in the trial of Paula Farrell, prosecution counsel Gerard Clarke SC said the State did not have to prove an intention to kill and proving an intention to cause serious injury was sufficient.

Mr Clarke also said the accused’s allegation that her partner sexually attacked her on the night was “an outrageous lie” against a man who could not give an alternative account of events.

Ms Farrell (47), of Rathmullen Park, Drogheda, Co Louth, has pleaded not guilty to murder but guilty to the manslaughter of Wayne ‘Quilly’ McQuillan (30) at her home on January 1st, 2014.

She testified last week that Mr McQuillan had tried to have sex with her, that she did not want to have sex and that he had started strangling her with his hands before she went to the kitchen for a knife.

“I thought I was dying, I couldn’t breathe,” she told her barrister Caroline Biggs SC. Ms Farrell has accepted in her evidence that she stabbed Mr McQuillan with a knife four times but said she only remembered stabbing him twice.

Evidence has been given that Ms Farrell was sexually abused when aged between seven and 14 and that she started to drink heavily when she was 20.

The court has also heard from two psychiatrists that Ms Farrell was suffering from post-traumatic stress disorder (PTSD) and alcohol dependency at the time she stabbed her boyfriend to death.

Addressing the jury on Wednesday, Mr Clarke said Ms Farrell had chosen the “biggest knife in the knife block” and the natural and probable consequences of this was that Mr McQuillan would be serious injured.

Mr Clarke submitted that Ms Farrell’s side would raise the partial defence of provocation, where one is not capable of controlling their actions and being a master of their mind.

“I remind you that Ms Farrell never said in her evidence or to anyone in the six years since Mr McQuillan died that she was in a state of total loss of control.”

Mr Clarke submitted that the account of a sexual attack taking place before the stabbing was first put forward by Ms Farrell 16 months after Mr McQuillan died. He told the jury that if they considered that the sexual attack did not happen, then there was no basis for provocation and it did not arise.

He called the alleged sexual assault an “invented lie” and submitted that Ms Farrell had claimed that the deceased had turned into a “homicidal rapist for no reason”.

Furthermore, he said none of the defence experts had sought in any way to explain how post-traumatic stress disorder (PTSD) and childhood sexual abuse were related to the killing of Mr McQuillan.

“This was because there are no connections. If there was a connection they would have told you,” he argued.

Counsel went on to tell the jury that the only reason they had heard about Ms Farrell having PTSD and being sexually abused as a child was to create sympathy in their minds. He urged them to be cold and dispassionate in assessing the evidence and leave any sympathy aside.

In her closing statement, defence counsel Ms Biggs asked the jury to look at the partial defence of provocation if they came to the view that Ms Farrell intended to kill or cause serious injury to Mr McQuillan. The barrister asked them to consider Ms Farrell’s own state of mind when she committed this “heinous act”, which she said her client was not seeking to justify.

Ms Biggs said her client repeatedly said in her evidence that she never wanted to kill or cause serious injury to Mr McQuillan.

Counsel said Ms Farrell had never resiled from her central position from the moment she was questioned by gardaí which was that she only wanted to hurt Mr McQuillan like he had hurt her that night.

Ms Biggs said Ms Farrell is classified as “borderline intellectually disabled” and notwithstanding that went through continuous cross-examination from the prosecution over a number of days.

She reminded the jury that Ms Farrell had six litres of alcohol in her system on the night and asked whether the accused could have formed the specific intent or was there a reasonable possibility because of the state she found herself in that she did not think through the consequences of her actions.

“You must look if she lost self-control from her particular situation and decide if she was provoked. PTSD is relative to her subjective state of mind.”

Ms Biggs pointed out that Ms Farrell had described the sexual attack on her by Mr McQuillan as intensely private and said it had taken her client five years of sobriety to be able to discuss her feelings with counsellors.

“People who have suffered child sexual abuse put a lid on everything sexual,” she said.

The defence lawyer submitted that while there were inconsistencies in Ms Farrell’s account, she had remained resolute on the critical and core issues in the case.

She said there was clear evidence that Ms Farrell was choked or strangled on the night from the injuries to both sides of her neck.

She added that there had been no time for passions to cool and it had been a rapid as well as a dynamic event.

Ms Biggs submitted that while two psychiatrists had substantially favoured intoxication as the reason why events had occurred on the night, they had also agreed that mental factors had played a role.

Mr Justice Paul McDermott will continue his charge to the seven men and four women of the jury on Thursday.