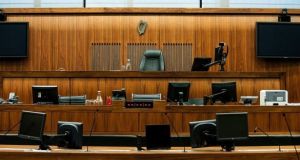 A jury will decide if a man who denies attempting to murder his partner by stuffing underwear in her mouth and beating her with a hammer should be found not guilty by reason of insanity.

Prosecution barrister Paul Burns SC, in his closing speech, told the six men and six women that the accused man was high on cannabis and does not qualify for the special verdict.

The accused man’s barrister Ronan Munro SC said his client was suffering from a mental disorder at the time and unable to refrain from his actions.

Tomas Gajowniczek (37) of The Ice Rink Apartments, Dolphin’s Barn, Dublin 8, has pleaded not guilty to the attempted murder of Alicja Kalinowska (30) at their home on June 16th, 2016.

He also pleaded not guilty to intentionally or recklessly causing serious harm to Ms Kalinowska on the same date at the same location.

Summing up the evidence, Mr Burns told the jury that the accused revealed his intention when he told Ms Kalinowska, during the alleged assault: “It would be better to go to jail for life than a b***h like you stay alive.”

He further told gardaí that he was trying to suffocate her when he stuffed underwear in her mouth and held her nose.

He told the jury they have heard evidence from professor Damian Mohan of the Central Mental Hospital that the accused man was regularly using cannabis at the time and was suffering from a drug-induced psychosis.

Under the Criminal Law (Insanity) Act 2006 intoxication is not a mental disorder, he said.

Mr Munro is relying on the evidence of Dr Conor O’Neill of the Central Mental Hospital who told the trial that the accused was likely to have been using cannabis but that he also suffered from a mental disorder as defined by the Act. Mr Munro will continue his speech to the jury at the Central Criminal Court this afternoon.