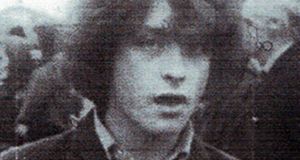 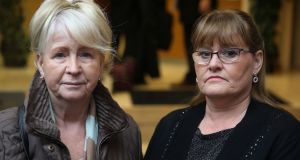 Philomena Smyth (left) and Philomena McKee, aunt and sister respectively of the late Kevin McKee, arrive at the Coroner’s Court in Dublin, where an inquest was held into his death. Photograph: Brian Lawless/PA Wire

A sister of one of those “Disappeared” during the Troubles, Kevin McKee, has said the family has suffered mental torture since the day more than 40 years ago when he went missing.

Philomena McKee told an inquest into the death of one of her brothers at the hands of the IRA that her mother never recovered from the loss of the then 16-year-old.

“The day they took my brother, they took my mother too,” she said. “We were mentally tortured. It went down through a generation.”

Family members told the inquest at Dublin Coroner’s Court on Thursday that they never knew what happened to Kevin until the IRA admitted his killing as part of the Belfast Agreement in 1999.

Born in Blackpool, Mr McKee’s mother Mary McKee brought him back to west Belfast shortly after his birth. His sister said the area where they grew up was “particularly affected by the Troubles”.

“There were often shootings,” she said.

Mr McKee was last seen alive on October 2nd, 1972. The family heard stories of sightings, but despite searching they never found him.

“I remember going out looking for him with Mam. She used to sit waiting for him to come home,” Philomena McKee told the inquest.

A joint statement from Philomena McKee and Mr McKee’s aunt Philomena Smyth said his mother never got over his disappearance.

“When Kevin was taken he was hardly more than a child. His mother never got over it and while it wasn’t until after the nearly 40 years of mental torture that she died, in reality they may as well have murdered her when they put Kevin in that hole in Co Meath in 1972.

“But now Kevin is with his Mummy in a Christian grave where he should be. He can now rest in peace. We are truly grateful for that.”

Archaeologists were searching bogland in Co Meath for another of the “Disappeared”, Joseph Lynskey, when two sets of human remains were recovered on June 25th, 2015. They were later identified as those of Kevin McKee and Séamus Wright.

The skeletal remains were largely intact, according to State Pathologist Prof Marie Cassidy. The cause of death was a gunshot wound to the head.

A number of items were used to identify the remains, including an old 6p coin dated 1955, which was still legal tender in 1972.

Mr McKee was wearing a distinctive wristwatch gifted to him by a relative, and he had broken his collar bone when he fell off his bicycle aged 11.

Prof Cassidy found a correlating scar on the recovered remains.

Members of the Independent Commission for the Location of Victims’ Remains (ICLVR) also conducted DNA tests and found a positive match to the McKee family.

Kevin McKee had been arrested earlier in 1972 but had run from Springfield Barracks and escaped despite police firing a shot at him, his aunt Ms Smyth told the court.

“In October 1972 he went missing again. We heard the IRA were looking for him, saying he was an informer. He was only 16 at the time.

“People were saying they saw him here, there and everywhere and we checked, but he was never there,” she said.

The McKee family noted it must be a “bitter blow” to the family of Joe Lynskey, for whom the ICLVR were looking when they found Kevin McKee.

Coroner Dr Myra Cullinane extended her sympathies to the family and the jury returned a verdict of death by unlawful killing.