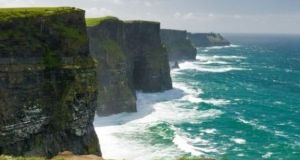 The Cliffs of Moher

A Dublin man watched in horror as his base jumping partner bounced off the Cliffs of Moher and plunged to his death last April.

In a deposition at the inquest into the death of Malcolm Rowley (45), Greg McEntee said that Mr Rowley’s parachute opened facing towards rather than away from the cliffs.

Mr Rowley’s parachute opened the wrong way after he ran and jumped off the cliffs and was in free-fall for a few seconds at around 7.10am on Saturday, April 22nd last.

Mr McEntee said: “He hit the cliffs and hit it a few times, bouncing off the cliff all the way to the bottom.”

Clare coroner, Isobel O’Dea recorded a verdict of misadventure after hearing that Mr Rowley of Bantry, Cork died, as a result of multiple injuries sustained in the 600ft fall.

Moments before Mr Rowley’s fatal jump, Mr McEntee successfully performed the base jump and in his deposition said that he took a run and jump off the cliff top and was in free-fall for three seconds before opening his parachute and guiding it in for landing.

Mr McEntee from Artane in Dublin said that after putting away his parachute following landing safely at the bottom of Aill na Searrach it was his intention to video Mr Rowley’s jump.

He said: “I recorded it on my Go Pro.” He added that did not know how much of the jump he filmed as the camera was on his helmet.

Mr McEntee said that he saw Mr Rowley jump and that his body position looked okay in free-fall.

He said: “Malcolm opened his parachute on time but when it opened, it didn’t open facing away from the cliffs.”

A third man and work colleague of Mr McEntee at Tullamore Dew in Co Offaly, Scott Baird travelled to the cliffs on the day to see the base-jumping.

The Scottish man said Mr Rowley, Mr McEntee and himself posed for photos at the top of the cliffs before the jumps took place.

Mr Baird said the others looked at a video of a friend of Mr McEntee’s base jump at the location on his phone before deciding at what spot to jump from.

Mr McEntee said that his own jump was a mirror image of the one completed by his friend.

Giving his opinion as to why Mr Rowley’s parachute did not open the right way, Mr McEntee said: “There are different reasons that would cause the parachute to open the way it did. Even if you do everything right, there is a chance you would get – one in a 100 – that you get one facing on to the cliff.

He said: “We are trained to deal with situations like this if they arise, but it is hard to say what happened Malcolm – if he had enough time to manoeuvre away. It just appeared that he had no time to deal with the problem.”

Mr McEntee said that Mr Rowley “was a fairly well experienced paraglider and had a reasonable amount of sky-diving and base-jumping experience. You wouldn’t call him a beginner.”

Mr McEntee said that he had been sky-diving for 10 years and base jumping for five years and met Mr Rowley on Facebook through mutual friends a month before the trip to the Cliffs of Moher. He said: “I made contact with Malcolm on April 21st on doing a possible base jump at the Cliffs of Moher as the weather was looking good.”

After Mr Rowley’s fall, Mr McEntee said that he made the 999 call at 7.14am and the emergency services arrived 55 minutes later.

Mr McEntee made efforts to revive Mr Rowley, as did the emergency services, but he was pronounced dead at the scene at 10am.