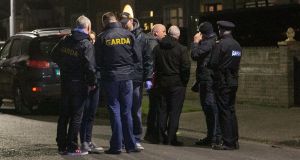 Gardai at the scene in Coolock where Kenneth Finn was fatally shot in February. Photograph: Gareth Chaney/Collins

A 36-year-old man shot at point blank range in Coolock last February died of a gunshot wound to the head.

The cause of death was recorded at Dublin Coroner’s Court at the opening of an inquest into his death.

His mother Mary Finn formally identified her son in the hospital following his death to Garda Glenn Miller of Coolock Garda station.

A postmortem conducted by State Pathologist Dr Marie Cassidy gave the cause of death as a gunshot wound to the head.

Inspector Majella Armstrong appeared at an inquest into the man’s death at Dublin Coroner’s Court seeking a six month adjournment of the case.

“This is a live investigation with a number of lines of inquiry to be further pursued and technical data to be followed up,” Insp Armstrong said.

Mr Finn was shot as he sat in a vehicle in Coolock on Sunday, February 25th at about 8.15pm.

He was taken to Beaumont Hospital where he died two days later.

Gardaí believe the shooting was related to organised crime.

Coroner Dr Myra Cullinane adjourned the inquest to May 23rd, 2019 for further mention.