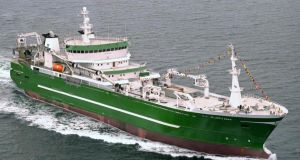 The skipper of the world’s largest trawler has been convicted of breaching EU fishing regulations on board a vessel that’s half a metre longer than the Croke Park pitch.

Two of the five charges against Gerrit Plug, skipper of the 144.6-metre Annelies Ilena, were rejected on legal grounds by Judge John O’Hagan at the end of the prosecution case at Donegal Circuit Court.

However, the jury found Plug guilty, by 11-1 majority verdicts, of failing to record discarded fish and discarding species of fish subject to quota.

The jury returned a unanimous verdict that the vessel exceeded the maximum space between bars on a device which filters unwanted from wanted fish.

Plug, who the court heard had been at sea for 39-years without conviction in any country, was fined a total of €105,000.

The judge, who did not order forfeiture of the vessel’s fishing gear, said: “This is a very large trawler. As a result of being king of the seas, there is a specific obligation to ensure that all the gear is correct as an example to other trawlers. It has been found wanting.”

In a three-day trial, the prosecution claimed that the Annelies Ilena, in an “ongoing, systematic practice”, was in breach of EU regulations off Tory Island, and had illegal equipment which was grading the fish to increase the value of the catch, and discarding fish which should have been kept back into the sea.

The suspicions of the Irish navy and sea fisheries protection officers were raised when they saw large sea-birds apparently eating fish directly behind the trawler.

Prosecuting counsel Patricia McLaughlin said it had been suggested by the defence that there was a vendetta against the Annelies Ilena when it was boarded by officers from the Irish navy vessel LÉ Róisín.

Ms McLaughlin told the jury of six men and six women: “On the contrary, it was a routine inspection carried out by the navy. It flies in the face of the evidence to suggest there was a vendetta.”

Defence counsel Richard Lyons said there was “innuendo, speculation and bias” in the evidence of the main prosecution witness, Killybegs-based sea fisheries protection officer John Hederman, who boarded the trawler with navy officers.

Mr Lyons said in the six hours Mr Hederman spent aboard the Annelies Ilena on November 22nd, 2013, he “scoured” the vessel for evidence of breaches of EU fishing regulations.

Mr Lyons told the jury: “There is no evidence of any discards from the vessel.”

Judge John O’Hagan told the jury that they had to decide between rival suggestions by the prosecution and defence that Mr Hederman was telling the truth about what he found or that there was a chance that some of his evidence was less than fair.

The judge explained that the regulations were all part of an EU mechanism to conserve stocks and make sure they were available for all fishermen.

Plug, a Dutch national, had denied all offences. The Dutch-owned vessel, which has a crew of 60, including 13 Irish citizens, was known as the Atlantic Dawn when it operated out of Killybegs.