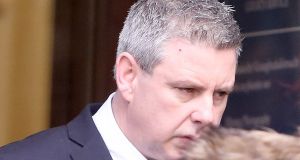 A drunk driver, who killed an elderly pedestrian and injured two gardaí – one of them seriously – has been given 240 hours community service in lieu of a four-year prison sentence.

He pleaded guilty last November to causing the death of Liam McDonnell (66) and causing serious bodily harm to Garda Sharon Casserly by driving dangerously near Ardrahan in the early hours of February 1st, 2016.

He also pleaded guilty to driving while drunk and having a blood/ alcohol reading of 272 mgs of alcohol per 100mls of blood at the time of the fatal collision.

Sentence had been adjourned to Thursday for the preparation of reports and victim impact statements.

Superintendent Sean Glynn gave evidence that staff at a local nursing home rang gardaí at 11.35pm on Sunday night, January 31st, 2016, to say a resident had left the premises and they were concerned because he was wearing dark clothing. Two garda cars were despatched to look for Mr McDonnell and just over half an hour later, at 12.10am, Garda Casserly and Garda Peter Murtagh, who were in one of the patrol cars, located Mr McDonnell. He was down on the ground on his hands and knees, on the hard shoulder about 1.5km on the Galway side of Ardrahan.

The patrol car pulled in on the hard shoulder, three to four meters behind Mr McDonnell, facing in the direction of oncoming traffic. Its dipped headlights and blue flashing lights were on.

Mr McDonnell appeared intoxicated and he resisted efforts by both gardaí to get him into the patrol car.

Supt Glynn said that as both gardaí were getting him into the patrol car, they were struck without warning by a silver Audi car. The collision, he said, occurred at 12.30am on February 1st 2016. The force of the impact caused Mr McDonnell’s death and his body was found in a nearby field. Garda Casserly received severe injuries and her colleague could hear her screaming in agony as she lay further down the road in on the hard shoulder.

Garda Murtagh sustained a broken leg, a large cut to his head and damage to his knees and ankles and he could not move to help his colleague. He rang the emergency services from his mobile phone and told Nestor to go to a nearby house for help.

Nestor, who sustained a minor head injury in the collision, was later arrested. He told gardaí he left his home at 7pm the previous evening to attend a wake near Ardrahan.

Supt Glynn said Mr McDonnell was pronounced dead at the scene. A subsequent toxicology report showed he had 182 mgs of ethanol in his system, which came within the toxic range.

A brief victim impact statement from Mr McDonnell’s ex-wife, was read into evidence. “I’m not looking for anything except clemency for his (Nestor’s) young family, as jail will not help bring Liam back,” it read.

Impact statements from Mr McDonnell’s two grown-up daughters were also read out. Both said their father had been a talented musician, writer and artist until alcoholism took over his life and rendered him homeless. They thanked COPE and the Simon Community for the excellent care their father had received through the years and urged people to donate to both services.

Supt Glynn confirmed Nestor had no previous convictions and was married with two children.

Garda Casserly read her own victim impact statement. She listed the multiple injuries she sustained, including a brain injury, and the court heard she also suffered a stroke while in hospital which left her paralysed on her right side for a time. She had to cancel her wedding day which was due to take place the following June and her career prospects have been put on hold. “My life has been turned upside down because of the mindless and selfish actions of a drunken driver,” she said.

Garda Murtagh told the court that while he suffered serious physical injuries he said his one lasting regret was for Mr McDonnell. “I feel like I failed in my duty to protect him,” he said.

Mr Nestor apologised in court to Mr McDonnell’s family and to both injured gardaí who were also present. He told the court he had contemplated taking his own life after what happened.

“I will forever beat myself up for getting behind the wheel with alcohol taken,” he said.

Judge Rory McCabe said everyone accepted Nestor’s remorse was genuine but the fact was that he had consumed alcohol before driving. Taking Nestor’s previous good record, his genuine remorse, his mental state and the very positive probation report – which deemed him suitable for community service – into account, Judge McCabe said the interests of justice would not be served by imposing an immediate custodial sentence.

He said the appropriate sentence was to impose the maximum of 240 hours of community service in lieu of a four-year prison sentence for the charge of dangerous driving causing death and serious injury, along with a four-year disqualification. The judge also fined Nestor €1,000 and disqualified him for three years for the drink-driving charge.