Court to rule on problem with road traffic offences amendment 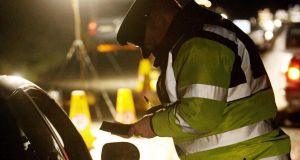 A solicitor said the only way to sort the matter out would be to serve fixed-penalty notices in such a way as delivery was fully recorded. Photograph: Niall Carson/PA

Prosecutions for road traffic offences where fixed-penalty notices were not paid and the defendants say that they did not receive the notice are expected to remain on hold following a High Court hearing on Tuesday.

Ms Justice Úna Ní Raifeartaigh said section 44.10 of the Road Traffic Act did not distinguish between those who chose not to pay a first fixed-charge notice and those who genuinely did not receive it.

The 2016 Oireachtas amendment, which came into force a year later, currently prevents people from arguing as a defence to motoring offences that they were not served with a first fixed-charge notice.

A number of District Court prosecutions have been on hold pending the High Court challenge by a man to his conviction, for which he received a €300 fine and five penalty points.

Ms Justice Ní Raifeartaigh is expected to give her written ruling at the end of this month, though all prosecutions are unlikely to go ahead until the matter is resolved, according to legal sources.

The State will then have to decide if it should appeal or whether it should change the law, though some legal sources suggest that a one-line change to the law might be sufficient.

On Tuesday the judge said she had yet to finalise her judgment on the complex case, and a similar case, and would deliver that on October 30th. No final orders will be made before that.

Because she was aware the judgment would have widespread impact, she said she would outline her conclusion so the State would have time to either appeal or amend the relevant legislation.

The amendment was introduced to stop what was seen as a loophole, where people who had received fixed penalty notices could claim in court they had not.

Ms Justice Ní Raifertaigh has found that a person who had genuinely not received a notice would end up being treated the same as a person who had knowingly avoided paying the fixed charge. People who fail to pay the notice end up paying a higher penalty.

Legal sources said the issue could be fixed by giving judges in the District Court the discretion to decide that a defendant genuinely had not received a notice, and applying the lesser payment that comes with paying the fixed charge.

However, a traffic offences expert, solicitor Evan O’Dwyer, said in his view the only way to finally sort the matter out would be to fix the fundamental issue and serve fixed-penalty notices in such a way as delivery was fully recorded.

Asked how many cases came before the courts each year where defendants said they had not received a fixed-penalty notice, Mr O’Dwyer said there was not a court he went into where he didn’t hear the defence being made.