Four arrested in clashes at anti-facemask protest in Dublin 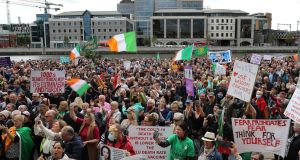 Four people have been arrested at an anti-lockdown and anti-facemask protest in Dublin on Saturday afternoon.

Gardaí said one was arrested for breach of the peace, two were arrested for public order offences, and the other man for possession of an offensive weapon.

Hundreds of people attended the protest at Custom House Quay in the city centre.

The group is led by Maeve Murran, a “kinesiologist” and anti-vaccination campaigner, and Kelly Johnson, a homeopath who has claimed vaccines can cause autism.

At around 2pm, there were scuffles with gardaí when a group of people arrived at the scene together and were prevented from reaching the Custom House.

Three of the arrests were made around this time.

A fourth person was arrested just after 3pm as gardaí were checking people entering Custom House Quay, where speakers were addressing a large crowd. Gardaí overpowered the man as he resisted being tackled. He was then led away to a waiting Garda vehicle where a search uncovered a pen knife with multiple blades.

Aside from a very small number of protestors verbally abusing gardaí, the demonstration was overwhelmingly peaceful.

Ms Murran criticised the lockdown and said the numbers who died from Covid-19 alone did not constitute “shutting down society”.

She said it was “tragic” that hundreds of people died during the lockdown without their loved ones present.

Another speaker, Prof Dolores Cahill, urged the crowd to write to their doctors asking them if they would prescribe Hydroxychloroquine to the vulnerable and elderly saying “we have the treatment, we don’t need the lockdown”.

Hydroxychloroquine is a medication used to prevent and treat malaria. Last June, the Recovery study, the world’s largest randomised trial of potential coronavirus treatments, concluded hydroxychloroquine had no beneficial effect on patients hospitalised with coronavirus.

In July, the World Health Organisation said it was discontinuing its trials of the malaria drug in hospitalised patients with Covid-19 after they failed to reduce mortality.

There was little sign of social distancing at the event and the majority of the protestors did not wear masks.

There was also a small counter protest on Butt Bridge.

Garda sources said a large and high visibility presence was put in place because the protest was expected to be sizeable and because a counter protest march had been planned.

Gardaí were forced to move in and break up some fighting that broke out before the event began, according to Garda sources. One man was badly beaten and was taken away by gardaí for medical treatment.

Some of the aggressors who were not arrested at the scene have been identified by gardaí.

About 20 Garda vans were parked at the entry points to the quay and one at Butt Bridge, which was partially blocked to traffic to accommodate the policing presence and Garda vehicles.

Some uniformed gardaí took up a presence inside the protest cordon to monitor the crowd while plain clothes armed detective also mingled among the crowd.