‘Hardly anyone is masked up on the bus these days’

On a Luas carrying around 80 passengers, just five are wearing masks 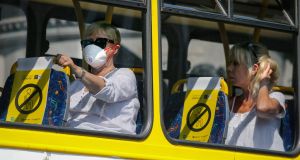 A passenger wears a mask on board a bus. Photograph: Crispin Rodwell/ The Irish Times

“Mffwffwhmmh,” I say to the driver, behind my homemade face mask.

“Where?” he says evenly, behind his. Presumably, not for the first time today.

“Leeson Street!” I shout at him, presenting my Leap card. This is already weird.

It’s rush hour on a Wednesday, or what we used to call rush hour, at least. Through the topsy-turvy looking glass of the coronavirus, 8am on the 39 bus from Clonsilla to UCD is devoid of the usual jostling, pushing and commuter squirming. It’s entirely civilised, in fact.

Of the five of us on the lower deck of the bus, all spread out into different corners of the vehicle, three of us are wearing masks. At time of publication, it is expected that masks will be made mandatory on public transport.

One fellow passenger, not wearing a mask, eyes me suspiciously from behind her sunglasses. I smile extra wide, so that she can see my eyes crinkle with a cheery bonhomie.

In spite of this moment of awkwardness, my pulse appears to have slowed by the time I reach the city centre. It took a huge tragedy for it to happen, but this is the city centre utopia that road safety activists and urban planning protestors have dreamed of. There is traffic on the road, certainly, but Dublin’s quays are no longer a grimy choke of stalling vehicles, fumes and frustration. It takes 12 minutes to get to St Stephen’s Green from Stoneybatter in Dublin 7.

Liz, who lives in Cabra and works in finance on Baggot Street, has been using the bus consistently on her daily commute to work though the lockdown. “I’m loving going into work these days. Things have definitely picked up a bit since the builders went back to work, but it’s still pretty stress-free,” she says. “Look around you, there’s no road rage, no jay-walking, nothing. Ah, it’s a nice vibe. I’m just enjoying it while it lasts!”

The sun is keeping inclement weather at bay, and it’s not uncommon to see empty buses traverse the busiest thoroughfares in the city centre. At 9.15am, the 38 bus heading to Damastown has zero passengers on board. Yet, of the four buses I use on Wednesday morning, there had been an average of five passengers travelling.

I’m enjoying the quietude, but others have had a different experience. Eavan uses the 13 and 40 to get to James’s Street, and has done since March.

“What I find interesting is that earlier in the pandemic, buses were arriving five at a time, but now I keep finding as restrictions are being relaxed, it’s really hard to get a bus in the first place,” she says. “I’ve noticed sometimes that bus drivers have gone above and beyond. If they see people stuck in the rain and waiting for a bus, they’ll break the guidelines to let people on.

“I think people are very sound about social distancing, but I’d like to see maybe some more guidance around the mask thing – that has been very haphazard,” she adds. “My pet peeve is the windows. I open all the windows as soon as I get on,” she says.

For Carla, on the 145 heading towards Kilmacanogue, this is her first time on public transport in three months. She is only alighting the bus at D’Olier Street because she is running late for her job in retail. “Hardly anyone is masked up on the bus these days,” she says. “It feels better to walk.”

She wears a mask, but given that there are three other passengers travelling, she has decided to keep it in her handbag. “Too hot for it today, anyway,” she asserts.

Similarly, on the 155 to Bray, none of the five passengers was wearing protective face masks. The 39 to Clonsilla - the driver notwithstanding - was a mask-free zone. A sign in the stairwell recommends the wearing of masks to anyone over 13.

The Luas, meanwhile, is a very different beast altogether. Rush hour or not, the trams appear to get more populated as the day goes on. Were it not for the tell-tale yellow signage outlining Government guidelines, this could be any regular day pre-lockdown. Of the 20-or-so passengers travelling at lunchtime on the Green Line to Broombridge through the city centre, about five are wearing masks. Save for one young woman, the mask wearers appear to be over 65.

I cross over to the Red Line, where already a sizeable cluster of passengers are waiting to get on the tram at the Abbey Street stop. On the platform itself, there’s not much enforcement of social distancing, either among passengers or by any staff. And, once a very busy tram arrives, it does nothing for my creeping anxiety levels.

“Are you going to get on? Seems a bit packed,” I say to the young woman standing next to me. Her eyes widen. She looks as me as though I’ve suggested cart-wheeling all the way to Kildare.

By the time we leave the stop, the tram is carrying about 80 passengers; about five of whom are wearing masks. Recent statistics claim that about 41 per cent of Irish people are using face masks. None of them use the Luas.

Inside the lunchtime Luas, much as it is with Dublin Bus, seats have been blocked from use so that passengers can enforce social distancing. In the main, people are compliant with this one directive, but it hasn’t occurred to people not to congregate around the tram doors instead.

A well-dressed man, sans mask, steps on board at Museum stop, scans the tram for a spare seat, and decides to wedge himself in between me and the door instead. If he is at all concerned about the fact that he has done away with social distancing etiquette to the extent that we are literally touching, he doesn’t show it.

Two security guards clamber on board a stop later, again without masks. It’s been a weirdly unnerving trip.

‘We treat surgery as kind of icing on the cake’
4

The death of the bra: Will lockdown’s great lingerie liberation last?
8

Do you really need to take supplements during pregnancy?
9

As lockdown begins to lift, once again I feel like a trapped bird
10

Lockdown letters: ‘Life is all about making connections’
Real news has value SUBSCRIBE