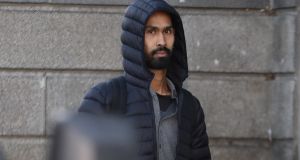 Umesh Maharjan was working at the Chinese takeaway in Rathnew to finance his college degree. Photograph: Collins Courts

A student has settled his action over devastating burn injuries suffered while working in a Chinese takeaway after he sat on a bucket containing freshly discarded hot cooking oil which splashed on his back and arm.

The settlement for Fine Arts student Umesh Maharjan was on undisclosed terms and the High Court case was struck out.

Mr Maharjan, originally from Kathmandu in Nepal, was working in the takeaway to finance his degree when the accident happened on August 21st, 2015.

Mr Doyle said the student was taking a break at the back of the Rathnew Chinese Takeaway premises in Rathnew,Co Wicklow where plastic buckets were kept and where staff went for a break.

Somebody had put hot cooking oil from a deep fat fryer in a bucket and when Mr Maharjan sat on it, the lid gave way and he collapsed back and oil spilled over his back and left arm, counsel said.

Colleagues of his had helped and put water and some ice on the affected areas and Mr Maharjan was taken to hospital.

Mr Maharjan (29), Windmill House, Dock Road, Limerick had sued Rathnew Restaurant and Takeaway Ltd with offices at Rockville House, Rathnew, operators of the takeaway restaurant, as a result of the accident.

He claimed failure to take any or any adequate precautions so as to provide him with a safe place of work and a safe system of work.

He also claimed hot oil was stored in a container that was unfit for purpose and created an obvious hazard and trap for him.

Mr Justice Michael Hanna was told the issue of liability had been withdrawn in the case and it was before the court for assessment of damages only.

Mr Doyle said, when Mr Maharjan was brought to hospital he was in excruciating pain and later had unbearable pain when dressings were changed. The accident had a devastating effect on his life and he has been left with grossly disfiguring scars, he added.

In evidence, Mr Maharjan said he was scared and his back was really hot.

“The pain was really hard for me. I feel bad I will have this for my entire life,” he said.

When the case resumed before the court yesterday afternoon Mr Doyle said it had been settled and could be struck out.

Mr Justice Hanna wished Mr Maharjan well in the future and described him as a “very impressive gentleman”.