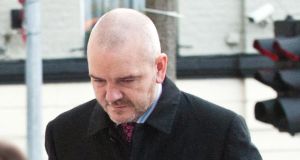 Former Solicitor Thomas Byrne (47) outside the Dublin Circuit Criminal Court. Mr Byrne has pleaded guilty to charges of theft and fraud from clients to the value of €50 million. Photograph: Collins

Byrne has been sent home for the night after three days of deliberations.

The jury of seven men and five women has now been considering their verdict for more than eleven hours.

The charges allege he transferred clients’ homes into his name and then used them as collateral for property loans. He is also accused of using invalid collateral to fraudulently borrow millions from six financial institutions.

He has pleaded not guilty to 50 counts of theft, forgery, using forged documents and deception between 2004 and 2007. Mr

Mr Byrne told the trial that his former business partner John Kelly forced him to borrow €51.8 million from the banks because they would no longer lend to him.

The accused claimed that Mr Kelly threatened to kill him and his seven-year-old daughter if he didn’t co-operate.

Before the jurors retired to consider a verdict, Judge Patrick McCartan told them the defence had not met several conditions necessary to run a legal defence of duress.