Aspects of Corbett trial unheard of in Irish courts 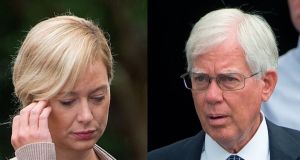 During his closing speech to the jury in the Jason Corbett murder trial, assistant district attorney Alan Martin had his fellow prosecutor lay face down on the courtroom floor.

Martin then picked up a child’s aluminium baseball bat and began pretending to hit the assistant as a bemused jury looked on. Slightly earlier in the day Martin had been forcefully banging the bat against objects in the courtroom while shouting to the jury about the force needed to kill Corbett.

It is a fair assumption that if a prosecuting barrister used these techniques in an Irish courtroom they would quickly be slapped down by an angry judge. They might even spend a few hours in a cell for contempt.

When it comes to closing speech theatrics, Irish barristers usually go no further than putting one foot on up their seat while making a particularity strident argument. And the TV trope of wandering around the courtroom while making a speech is never seen in Ireland. For one thing our courtrooms are too small.

The performances of the assistant district attorney are just some of jarring details readers will have noticed in the coverage of the trial of Molly Martens Corbett and her father Thomas Martens over the last several weeks.

The trial started with jury selection, a process which took five days. Prospective jurors were interviewed by the judge, prosecution and defence. The questions covered highly personal topics such as if they had ever experienced domestic violence.

Other topics included if they knew any police officers or if they had seen media coverage about the case. Jurors were also required to complete a 16-page questionnaire. If lawyers did not like a certain answer they could apply for a juror to be excused.

In Irish courtrooms lawyers are permitted to ask the jury no questions. Each side is allowed to challenge jurors (up to seven without giving a reason) but the only information they have on them is the juror’s name and occupation.

In fact most Irish lawyers usually base their challenges on appearances. The defence will try to get a jury close in age and appearance to their client. The prosecution will try to get one resembling the complainant.

The main charge faced by the accused in North Carolina is also unknown in the Irish legal system. Martens Corbett and her father were charged with second degree murder, meaning intentional but unpremeditated killing.

In Ireland there is only one type of murder charge and it carries an automatic life sentence. An Irish jury would not have to consider planning or premeditation to return a guilty verdict, only that the accused intended to kill at the moment they struck the blow.

One of the most noticeable differences in US trials is the lack of constraints on the media. Trials are regularly televised and nightly cable news punditry about the evidence is not unusual. Coverage of the Corbett trial has been subdued by comparison with the judge banning all cameras from the courtroom at the beginning.

However, news outlets were still permitted to insert their own analysis and context into coverage. In Ireland, journalists are usually confined to simply reporting what happened in court on that particular day, and even then only if the jury were present. Reporting other details, such as an accused’s previous convictions, will often land a journalist in hot water with the judge.

The most dramatic difference between the two systems is the presence of the death penalty on the North Carolina statute books. This does not apply in the Corbett trial; it is only applicable to first-degree murder and only then when another aggravating factor is present such as a sexual assault or robbery.

Molly Martens and her father Thomas Martens were sentenced to 20-25 years in prison. The average life sentence in Ireland stands at about 17 years.