Solicitor Brian O’Donnell and his wife have been granted a six-day stay on a High Court order requiring them to vacate the property Gorse Hill in Killiney, Co. Dublin. Video: Bryan O'Brien 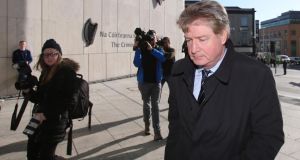 The Court of Appeal granted a six-day reprieve to solicitor Brian O’Donnell on a High Court order requiring him and his wife to vacate a mansion in the Dublin suburb of Killiney.

The ruling in effect suspended a High Court deadline of 5pm on Friday for Mr O’Donnell and his wife Mary Patricia to leave Gorse Hill on the Vico Road on foot of a trespass order obtained by Bank of Ireland and a receiver.

The receiver wishes to sell the house, valued at €7 million, to meet part of a €71.5 million debt owed by the O’Donnells for various unpaid property loans.

Cian Ferriter SC, for the bank, told the appeals court his client was “strongly opposed” to Mr O’Donnell’s application for a stay, saying there was no bona fide ground for appeal and the “balance of justice” would be served by the receiver taking possession.

Mr Ferriter said the O’Donnells had orchestrated a blockade of the property and were acting in flagrant disregard of the rule of law.

Binding agreement He referred to the order by Mr Justice Brian McGovern in the High Court, which found that Mr O’Donnell and his wife did not own Gorse Hill, were resident in the UK and had in 2011 signed up to a binding agreement to vacate the property in the event that the bank exercised its right to security.

Mr Ferriter said that when the Supreme Court had ordered the couple’s children to vacate the property, Mr and Mrs O’Donnell had recently travelled to Ireland from their permanent home in England and “barricaded themselves” into Gorse Hill, “artificially creating an occupation”.

Counsel for the bank said the O’Donnells had invited unconnected third parties linked to the self-styled New Land League onto the property.

While they claimed the third parties were there to prevent the media from accessing the house, the purpose was to prevent the receiver entering the property, he said.

At that point, Jerry Beades of the New Land League, who was sitting beside Mr O’Donnell, asked whether he could address the court.

Mr Justice Ryan responded that while he took “a very liberal view of who can sit with who”, there was a limit.

“Counsel is entitled to present his argument without interruption,” the judge said.

Mr Ferriter said the “overriding test” for the court was the appropriate balance of justice, he said. While Mr O’Donnell was entitled to exercise his constitutional right of appeal, “the status quo is that Mr and Mrs O’Donnell don’t own the house, don’t live in the house”.

Mr O’Donnell told the court he was “very concerned” Mr Ferriter was suggesting the facts as outlined by the High Court were incontrovertible.

He was challenging the essence of the claim that in 2011 he and his wife undertook to leave the house once the bank exercised its right to security. He also believed the High Court judge had erred in law and would present 22 grounds of appeal.

He said he had been “bombarded with tonnes of paper” with unrealistic time limits. The couple were given a little over 24 hours to vacate the property and take their belongings.

Asked by Mr Justice Ryan if it was correct that he didn’t live in the house, Mr O’Donnell said he believed it was not.

Asked whether he lived in the UK, Mr O’Donnell responded: “We live in the UK but we have a permanent right of residence in Gorse Hill.”

The appeal will be heard next Thursday at 2pm.

1 US passengers fly into Dublin: ‘I’m here for six days. I guess I’ll have to stay inside’
2 Maureen Dowd: Biden has his limitations but he’s no Trump
3 Covid-19: Restrictions on travelling abroad may last several years, expert warns
4 Quarantine process to be tightened as health officials grow nervous
5 Back with our old friends at eir – and nothing seems to have changed
Real news has value SUBSCRIBE