Bomb found at Derry hotel ahead of PSNI event

Dissident republicans thought to be behind attempted attack on Waterfoot Hotel 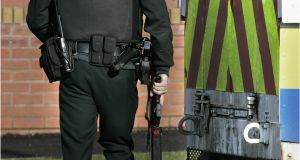 Dissident republicans are thought to be responsible for the disruptive security alerts which come after the PSNI announced it would be recruiting 100 new officers. Photograph: Dara Mac Dónaill/The Irish Times

A bomb has been made safe at a Derry hotel which is due to host a PSNI recruitment event next week.

The viable improvised explosive device (IED) was found in the grounds of the Waterfoot Hotel in Derry during an alert which began on Friday morning.

Dissident republicans are thought to be responsible for the disruptive security alerts which come after the PSNI announced it would be recruiting 100 new officers.

“A controlled explosion was carried out on the device and initial checks by ATO (Army Technical Officers) suggested that it was an elaborate hoax,” ACC Hamilton said.

“However, following further examination the object has now been declared a viable Improvised Explosive Device.

“This device had the potential to harm anyone in the area and those involved have shown total disregard for human life.

“We are obviously very thankful that this attack was thwarted and that no one was killed or seriously injured.” ACC Hamilton is confident “the actions of these few misguided individuals will not stop people pursuing a career in policing” and revealed that so far the PSNI has received 2,400 applications for the new jobs.

“I am aware of the disruption that has been caused by these security operations and I would like to thank everyone who has co-operated and worked with our officers throughout,” he added.

“I would continue to strongly encourage those interested in joining the PSNI and who want to make a positive contribution to Northern Ireland to come along to one of the familiarisation events taking place today and find out more about the opportunities that exist within the Police Service.”

Northern Ireland Policing Board Chair Anne Connolly spoke of her disappointment at the disruption caused by the Akers and has said “intimidation and threat won’t stop people choosing policing as a career”.