Human remains believed to be those of Brendan Megraw, who was ‘Disappeared’ by the IRA in 1978, have been found at Oristown bog near Kells, Co Meath. Video: Barry Cronin 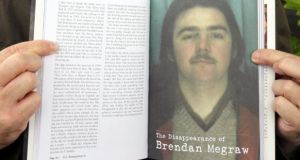 A piece on Brendan Megraw in the book The Disappeared Of Northern Ireland’s Troubles which collates the personal stories of 14 of the families affected. Photograph: Paul Faith/PA Wire 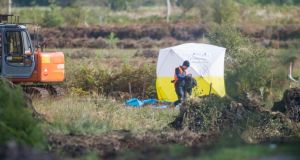 Work continues at the excavation site at Oristown bog near Kells, Co Meath where it is believed the remains of Brendan Megraw have been found. Photograph: Barry Cronin 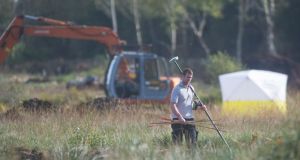 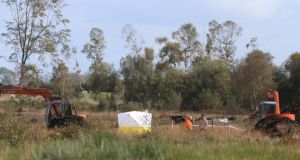 The scene where a body has been found in the search Brendan Megraw at Oristown bog, near Kells, Co Meath. Photograph: PA

Human remains believed to be those of Brendan Megraw, who was `disappeared’ by the IRA in 1978, were recovered at a Co Meath bog today.

His family has thanked whomever provided fresh information to the the Independent Commission for the Location of Victim’s Remains (ICLVR) which led to the find.

The information “refined” what was already known by the Commission and led it to return to the site at Oristown, Kells in August to carry out a new survey using advanced geophysical technology.

Mr Megraw (23) was abducted from Twinbrook, Belfast in April 1978 by the IRA who then murdered and buried him. He was awaiting the birth of his only child.

A number of previous searches at Oristown failed to find where he was secretly buried.

Mr Geoff Knupfer of the Commission confirmed “it was not the geophysics” but the additional information, “which refined what we had previously” that lead to the preparatory works at the bog .

As part of those works, which were in anticipation of a new search for Mr Megraw’s hidden grave, the remains were discovered.

The remains were spotted by a forensic archaeologist who was supervising the clearance of drains on the bog, Mr Knupfer said. The remains were not in a drain but beside one, he said.

It maybe tomorrow or Friday before the remains are removed, he said. The removal of the remains is “slow and laborious” and they will then be brought to the morgue in Dublin where the State Pathologist Dr Marie Cassidy will carry out a postmortem.

DNA testing will be needed to confirm the identity but many, including Mr Megraw’s family, are satisfied it is him.

“When I got the call I wasn’t expecting to hear this,” his brother Sean said.

He was telephoned by John Hill, the chief investigator with the Commission. “He asked me questions about what Brendan was wearing, about a duffle coat and jeans,” he said.

“We welcome the news but are still taking it in. It is bad news because it confirms that he is dead but it is good news because he can be recovered and land to rest with his mother and father,” Sean Megraw said.

“We are very grateful to the people who provided the information which identified the location. Maybe the publicity around this will prick someone else’s conscience and could lead to the recovery of the three people buried in Wilkinsontown,” he added.

He was one of 16 victims murdered and buried in secret by the IRA known as the Disappeared.

The IRA buried Kevin McKee and Seamus Wright, in 1972 in a double grave near Wilkinstown, a short distance from Oristown. Searches have so far failed to find them.

It is also suspected Joseph Lynskey, a former Cistercian monk taken from the Beechmount area of west Belfast in the summer of 1972, was also buried somewhere in the region.

The most high profile of the Disappeared was Belfast mother of ten Jean McConville whose remains were found on Shelling Hill beach in Co Louth.