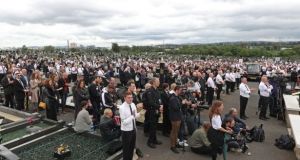 There would have been “widespread violence and disorder” if police had tried to stop or disperse the crowds attending the funeral of former IRA member Bobby Storey, PSNI Chief Constable Simon Byrne has said.

Mr Byrne defended the police’s handling of the funeral in a BBC interview, saying that this would have been “in nobody’s interests”.

He said the police investigation into alleged breaches of Covid-19 regulations at the funeral was continuing, and he hoped to be able to say “very soon” that the investigation was finished.

His admission “that the threat of public violence and disorder dictated the policing response to the Storey funeral... simply emboldens the arrogant attitude” of the organisers, she said.

The North’s Deputy First Minister, Michelle O’Neill, and the Sinn Féin leader Mary Lou McDonald were among a number of senior party figures who attended Mr Storey’s funeral in west Belfast in June.

Thousands lined the streets for the ceremony, which appeared to breach both social distancing guidelines and coronavirus regulations in a number of respects, including the limit on the number of people allowed inside the church for Requiem Mass, an oration by former Sinn Féin leader Gerry Adams at Milltown cemetery, and the presence of 30 people at a service at Roselawn crematorium.

Asked if the PSNI had abdicated its policing responsibilities at the funeral to Sinn Féin and its marshals, Mr Byrne said, “I don’t think it did.”

“I think obviously there’s a public image and people will draw conclusions about how we went about policing that event, and again we’re always here to learn lessons, reflect and see where we can do things differently, but we’re in nobody’s pocket, we don’t collude with anybody, we just have to use discretion – which is at the heart of our policing style – to make judgments about how we can safely enable all sorts of events to take place.”

Mr Byrne would not be drawn on the extent of any advance planning between the PSNI and Sinn Féin as to how the funeral should be dealt with, saying it was not appropriate to discuss this while the investigation was still ongoing.

“Because of issues that I know at the moment, it would be a question I’m best answering in a few weeks,” he said.

The Ulster Unionist MLA Doug Beattie told the BBC he believed the police had “badly got this wrong... This has become a festering sore that is affecting society and how we deal with Covid, but also how we trust our police force, and that has to be dealt with.”

Traditional Unionist Voice (TUV) councillor Stephen Cooper said the chief constable’s comments had “only added to the number of significant questions for the PSNI”.

“The public demand and deserve answers from Simon Byrne about any discussions which took place,” he said.