Bill to criminalise men who use prostitutes 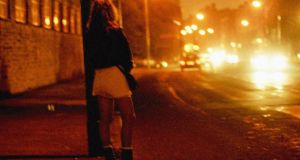 The Criminal Law Sexual Offences Bill provides for an ascending scale of penalties, from a fixed-notice fine of €500 for first-time offenders, to a €4,000 fine and/or four-week jail sentence for repeat offenders. Photograph: PA


Legislation to criminalise the purchase of sex will be introduced to the Dáil tomorrow.

The Criminal Law Sexual Offences Bill, to be introduced by Independent TD Thomas Pringle, sets out to partially decriminalise prostitution while imposing criminal sanctions on those who use prostitutes.

The approach, said Mr Pringle, would adhere to the model used in Sweden, advocated by the Turn off the Red Light Campaign here.

The campaign, endorsed by 68 organisations including the Immigrant Council of Ireland, Ruhama (the support body for women in prostitution), the Irish Congress of Trade Unions, the Labour Party, Safe Ireland, the Rape Crisis Network and Barnardos, aims to end prostitution and sex-trafficking.

Mr Pringle said yesterday: “[The Bill] will reduce the demand for sexual services, thereby reducing the incidence of prostitution in society. It will create a situation that will remove the attractiveness of prostitution and trafficking from organised criminal elements by creating the risk for purchasers of sexual services to be prosecuted with the element of ‘name and shame’ acting as a deterrent.”

Penalties
The Bill provides for an ascending scale of penalties, from a fixed-notice fine of €500 for first-time offenders, to a €4,000 fine and/or four-week jail sentence for repeat offenders.

At a briefing for TDs and Senators in Leinster House yesterday, Denise Charlton, chief executive of the Immigrant Council, said having seen “at first hand” the experience of the Swedish authorities and “the failure of regularisation in Amsterdam” the council had “ come to the firm conclusion that the best way to end the crime of sex trafficking was to target the demand for prostitution”.

Trafficking figures
The latest Department of Justice figures confirmed 134 people had been known to be trafficked here for sexual exploitation between 2009 and 2011, and that one in four of those were children.

“As a frontline organisation we do not believe the figures tell the full picture, and the OSCE and the US State Department agree. Both of these have criticised Ireland for falling short in the identification of victims of sex-trafficking.”

Ms Charlton rejected arguments that prostitution should be viewed as similar to other industries or employment opportunities. “It is run by organised crime which places up to 800 women for sale everyday online in Ireland”

Rowley, communications and policy officer with Ruhama, also rejected this proposition, saying one could “never, never countenance prostitution as a valid or acceptable choice for women. No job in a decent society should involve women being at risk of rape and violence every day”.