A new initiative in Paris will allow cyclists to skip red lights at certain intersections. Cyclists will be able to ignore traffic signals when turning right or at T-junctions. Video: REUTERS 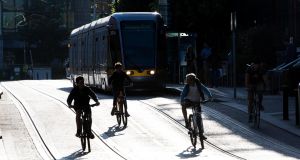 The €40 fine rises to €60 if it is not paid within 28 days. If it remains unpaid for a further 28 days, cyclists can either pay €80 or court proceedings are initiated. Photograph: Tom Honan

Almost 5,000 on-the-spot fines have been issued to cyclists in the four years since their introduction.

Breaking a red light has been the most common offence, accounting for more than half (2,444) of the 4,924 fines issued to date, according to figures released by An Garda Síochána

Last year, 1,507 fixed-charge notices (FCN) were issued to cyclists, the highest annual figure since the fines or fixed charge notices were introduced on July 31st, 2015, by Paschal Donohue, the then minister for transport.

“The figures for fixed-charge notices issued to cyclists show that, unfortunately, this system is very necessary,” Minister for Transport Shane Ross said.

“For example, a cyclist who breaks a red light is putting themselves at considerable danger, and also risking the safety of others. Ideally, we would prefer to see people act responsibly but we must have penalties in place to have a deterrent effect,” he added.

Fines of €40 can be issued by gardaí for a number of offences, such as cycling in a pedestrianised area, riding without reasonable consideration and failing to have lights. The fine rises to €60 if it is not paid within 28 days, and if it remains unpaid for a further 28 days, cyclists can either pay €80 or court proceedings are initiated.

The Department of Transport said there were no plans to declare further offences.

Dr Mike McKillen of the Dublin Cycling Campaign said the lobby group was calling for an early green light for cyclists.

“We know that in London the majority of cyclists are being killed by HGVs [heavy goods vehicles] at junctions. A lot of cyclists want to get ahead to avoid being crushed.

“There seems to be no willingness of authorities here to change the system to allow pre-green. What we have heard is it would require legislation – why not get on with it and do it,” he told The Irish Times.

Dr McKillen said cyclists were “easy pickings” for gardaí to pull over and he suggested fines for motorists who break red lights needed to be increased.

“Gardaí don’t try to stop drivers going through red lights – it’s very easy to stop a cyclist and issue a FCN for going through a red light because the cyclist doesn’t pose much of a threat to the Garda member who is actually putting up the hand to stop the cyclist,” he said.

“For a garda to stop a driver breaking a red light, they’re in grave danger of being run over.”

1 Trump threatens to ‘close down’ social media companies after Twitter fact-check
2 Binoculars at the ready: Elon Musk rocket to be seen in Irish skies tonight
3 Holohan tells ministers no immediate change to two-metre rule
4 Ancient Roman mosaic floor discovered under vines in Italy
5 Sil Fox tells of ‘months of hell’ as he is cleared of sex assault on woman in bar
Real news has value SUBSCRIBE