One man (70) died after incident, and two men seriously injured 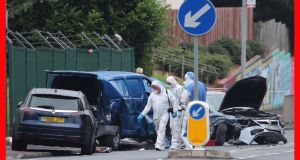 Forensics officers at the scene of a crash near Belfast City Cemetery. Photograph: Niall Carson/PA Wire

A man (32) has been charged over a collision outside a Belfast cemetery in which a 70-year-old man died .

Seamus Conlon (70) died on Saturday after a vehicle hit pedestrians. Two other men were also injured during the incident on the Whiterock Road. They were treated in hospital and their condition was described on Saturday as “serious”.

The Police Service of Northern Ireland (PSNI) said the man has been charged with a number of offences including causing death by dangerous driving, two counts of causing grievous bodily injury by dangerous driving, driving whilst unfit due to drink or drugs, and aggravated vehicle taking causing injury or death. He will appear before Belfast magistrates court on Monday, August 5th.