Years earlier, the former taoiseach had tipped Kennedy for US president 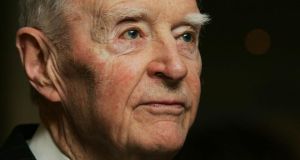 Former taoiseach Liam Cosgrave’s most vivid recollection of US president John F Kennedy’s 1963 visit to Ireland is of the excitement that gripped the country. “I remember driving up Dame Street and people were hanging out of windows to see him coming along as he was going up to the Castle.” Photograph: Cyril Byrne

Ireland’s venerable elder statesman, 93-year-old Liam Cosgrave, has a precise memory of the day US president John F Kennedy addressed a joint sitting of the Dáil and Seanad on June 28th, 1963.

It was not the first time the former taoiseach had come into contact with the charismatic Irish-American politician, whom he had predicted could become the “leader of the free world.”

Cosgrave, who retired from public life 36 years ago after serving as taoiseach from 1973 to 1977, can recall the exact detail of events now in the history books. He became aware of the Kennedys as far back as 1938 when the patriarch of the family Joe Kennedy, then the US ambassador to Britain, visited Ireland.

“I remember there was a photograph in the papers of himself and Mrs Kennedy and all the children. That was the first time they came to public attention here because, of course, they had the Irish background.”

Cosgrave was minister for foreign affairs in the mid-1950s when John F Kennedy paid his first visit to Ireland after his election to the US Senate in 1952. He had visited the country in the 1940s, before he entered politics.

“Senator Kennedy, as he was then, came here in 1955. He was staying in the Shelbourne Hotel and he had an operation on his back sometime before he came, I think from a war injury. I had him to lunch,” recalls Cosgrave.

Because Kennedy was in so much pain from his back the lunch was moved from Iveagh House to the Shelbourne Hotel to facilitate him.

The following year Cosgrave led an Irish delegation to the United States when Ireland was admitted to the United Nations. As well as addressing the UN general assembly in New York, he travelled to Washington to meet US political leaders.

“I met a group of senators and congressmen. It was a joint meeting of Democrats and Republicans and Kennedy was one of those present. We had a full discussion on the situation which had erupted over the Suez crisis.”

Cosgrave noticed Kennedy was already regarded as a figure of importance by his colleagues. “He was a very good mixer. What impressed me when I met him with the congressmen and senators was how friendly they all were to him. He got quite a welcome from the group. His back was at him for a long time and, as far as I can recall, he came into the meeting when I had started and they turned around and gave him a welcome.”

That autumn Kennedy made a bid for the Democratic vice presidential nomination to join the ticket with the party’s presidential hopeful Adlai Stevenson. He failed narrowly, but the national exposure he received from the episode was a boost to his career.

When Cosgrave encountered him, on his arrival in Ireland in June 1963, Kennedy was indeed the leader of the free world. Cosgrave recalls being at Dublin Airport in the official party to greet the US president.

“When he arrived here at Collinstown, the leaders of the parties in government went out to the airport to meet him. And Lemass (the then taoiseach) said to me, because I knew him, that I could come along as well, which I did.”

He recalls the whirlwind nature of that visit. “For instance the two universities gave him an honorary degree and he got it at one session which was held in Dublin Castle.”

Cosgrave had a short conversation with Kennedy at a reception in Iveagh House. Kennedy came over to him and asked: “How can I get in touch with Fr Leonard?”

The president explained that his wife Jacqueline was anxious to get in touch with the priest, whom she knew, so Cosgrave provided details of how he might be located.

Kennedy’s address to the Dáil was one of the highlights of the visit. “That was a very impressive occasion. I think it was nearly the first time anyone from outside spoke in the Dáil.”

Cosgrave’s father WT Cosgrave, who led the State during its first decade of independence, was also in Leinster House at the invitation of Lemass. “It was a good speech. It was very well put together, and he delivered it well and of course there was a very full attendance,” recalls Cosgrave.

Cosgrave’s most vivid recollection is of the excitement that gripped the country during the visit. “I remember driving up Dame Street and people were hanging out of windows to see him coming along as he was going up to the Castle.”

Youthful charisma
One of the things that impressed people was his youth compared to most visiting political figures and indeed many members of the Dáil. “He was young, you see, compared to what people were used to and that was a big attraction.”

Like the rest of the country, Cosgrave was shocked by Kennedy’s assassination in November 1963, but sadly that was not the last tragedy to visit the Kennedy family.

Cosgrave remembers well the day Robert Kennedy was assassinated in 1968. “I was having my breakfast listening to the radio and suddenly I heard a shot at this meeting that was being relayed and of course it was Robert Kennedy who was shot.”

At that stage Cosgrave was the leader of the opposition and taoiseach Jack Lynch invited him and Labour leader Brendan Corish to travel to the funeral. “We went to the funeral Mass in New York and then went up by train to Washington. I remember we were four or five hours in the graveyard in Arlington waiting for the cortege to arrive.”

As taoiseach from 1973 to 1977, and later in retirement, Cosgrave came into contact with the third of the Kennedy brothers, Ted, who became a long serving senator for Massachusetts and an important friend of Ireland on Capitol Hill.

“I heard Ted Kennedy on a few occasions and he was a wonderful speaker. He was very helpful to this country.”

The Kennedys were not the only prominent Irish-American family Cosgrave encountered in the course of his career. He remembers being on a trade mission to Chicago with Seán Lemass in the 1950s when they were brought along to a reception meet the recently elected Mayor Daley.