Pricewatch: Barbour and Ted Baker demand plenty of lolly for their brollies 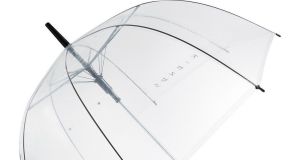 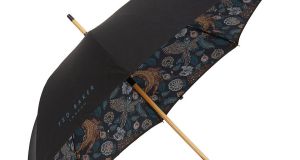 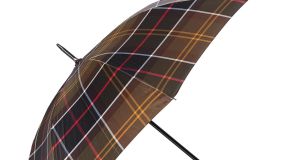 Barbour’s €45 Telescopic Umbrella has clearly been well made and will stand up to windy conditions. 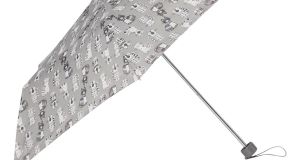 Don’t expect the €12 Totes umbrella to last more than one winter.

The Barbour people make very good jackets and have been making them for many many years but this is the first time we have come across a Barbour umbrella. We’re not entirely convinced they have mastered the art of umbrella-making in quite the same way that they have done with the wax jacket or even if they should have bothered to try. It has clearly been well made and will stand up to a fair old wind, while the tartan pattern will help it stand out if you find yourself rummaging among a host of other umbrellas at the exit of a building on a rainy day. We liked the engraved handle and it has a nice heft to it. But we were concerned by the price and we reckon we can get the same level of protection from an umbrella half the price.

Ah, here. Now, we know that €65 is not necessarily a lot of money in the grand scheme of things but it does seem wildly excessive to spend this amount on something as basic as an umbrella. Do you really need to look up and see the signature Ted Baker patterns over your head as you wander morosely through a rainy day? Probably not. Truth be told, after a couple of goes you’d probably stop noticing it. It is a grand product and will no doubt do the job asked of it, at least until it gets left behind in a taxi or in a dark pub corner. Then you will feel foolish for having spent €65 on it.

Who would ever have thought when this sitcom was first screened back in the 1990s that related merchandise would still be selling in Irish shops a quarter of a century later? But there ya are. And here this is. Will this umbrella become a family heirloom? No, not it will not. Will you look super cool as you walk the streets in the rain with it over your head? No, not you will not. But will it keep you dry in a shower and allow you take advantage of its transparent nature to pull the edges down over your head? Yes, yes it will be there for you. Boom boom.

This company makes a lot of umbrellas and they are to be found in big department stores and small pharmacies all over the country. It is nice and portable, which makes it easier to have it on your person or in a bag in the event that a hard rain falls. It will be grand as long as the rain isn’t that hard or the wind doesn’t blow that fiercely. It will last for a shower and maybe even quite a few showers but don’t expect to have this for more than one winter. We were also concerned about the level of cover it offers and on a really wet day you might be better advised to go with a bigger, sturdier option.