‘Armageddon for our nice wardrobe’: Tourists angry at dry-cleaning mix-up 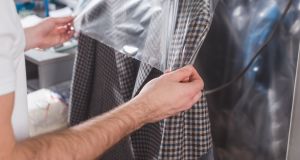 A chap by the name of Christian Muller travelled to Dublin with his wife recently but “what was planned as the trip of the year turned out to be a total nightmare,” he writes adding that while he was all set “to have a great time and wanted to enjoy the lovely city” he ended up having to “struggle with an abysmal performance of a self-declared professional dry cleaning service and their successful attempt at destroying our clothing”.

But he was getting ahead of himself and after his arresting introduction he went back to the beginning.

“When I was invited to a conference at UCD earlier this year, my wife and I thought that this was the sign we had been waiting for. We always wanted to go to Ireland but living abroad we never really had the opportunity. Now we decided to use the conference as an excuse to finally visit beautiful Dublin.”

The couple flew into “windy Dublin on a Wednesday”. They had a great time with the “friendly taxi driver who gave us a city tour while he took us to St Stephen’s Green” and were relaxed as they went to their room in Stauntons on the Green.

Christian tells us that was a “perfect start to the trip” and he waxes lyrical about a dinner they had in the city centre that night. “We heard so many lovely things about the city, the food and the people from our Irish friends that we were excited to wander around and be in [Dublin}. We were celebrating our wedding anniversary and booked different tours and lovely restaurants to share. The plan seemed perfect!”

But things were about to go awry.

“Having travelled a lot, we normally try to use dry cleaning services in the hotels to get key items cleaned,” he says. “The reception staff were very clear about giving our clothes to a dry cleaning service but it did not dawn upon us that the ‘dry’ in cleaning would repeatedly slip the mind of the reception staff – cleaning was all the staff would understand, even when we said ‘DRY cleaning, please’,” he writes.

He says they asked for the dry cleaning service as indicated in the information on the hotel’s brochure “specifically the Laundry Service/Dry Cleaning”.

He said they normally do not travel with very expensive items but “this time was special and we had booked some romantic dinners at Dublin’s excellent restaurants (of which there are many).” As a result they had a couple of pretty pricey items that they wanted to have dry cleaned.

He says that what happened next “turned out to be Armageddon for our nice wardrobe”.

He says the “front desk lady asked us to provide our clothes for dry cleaning in hotel bags used for taking to the cleaners”.

He insists that he “repeatedly” made it clear he was looking for his clothes to be dry-cleaned and says that when he asked if he needed to “fill out a service sheet/paper to indicate which kind of dry cleaning service we needed” he was told “that handing over the bags with the clothes inside was good enough”.

So he put four items – a Burberry Midnight Trench Coat worth €1,500, a red Valentino blouse valued at €250, a Moncler mohair jumper worth €400 and a Moss Bros. jacket with a price tag of €160 – into a bag and dropped it to reception.

When the items came back “it became clear that the reception . . . had sent all items to a laundry shop that offered both dry cleaning and washing, but with the request to wash them. We were taken aback. How can a hotel be so careless as to not understand the difference between dry cleaning and washing, but also, how can a so-called professional laundry service wash items in a machine with hot water (notably together – a coat, a suit, a cashmere pullover and a delicate blouse, all in different colours) that clearly scream from their tags: DRY CLEANING ONLY, DO NOT WASH? Only a complete unprofessional would even think of washing those items, let alone wash them all together in one cycle and then dry them in the same cycle,” he says.

He said he and his wife had to cancel most of their planned trips and tours as well as the restaurants in order to deal with the issue.

“We kept repeating that we were leaving on Sunday and we needed a definite answer and the replacement or compensation of all of our items before that.”

No resolution was to be found.

Christian says that when he eventually got to speak to the laundry company’s manager he “yelled that he was not going to respond for the lack of professionalism and mistreatment of our four items. His company did as instructed, namely washing and tumble-drying expensive clothing suited for dry cleaning only into oblivion.”

Christian says that he and his wife have been left “with sad and mixed feeling. While we so much looked forward to experiencing the lovely city, its flair and its people from the best of sides that Dublin has to offer – and indeed offered us at every corner, in every shop, in every restaurant and just down the street – we are thunderstruck by the damage” to the clothes.

He said they will return to Dublin to give the city and its people, and in fact the whole of Ireland a second try, as “we believe that Dublin is a lovely city that has welcomed us. . . . But we will not forget the damage done by the two businesses who gave us such pain on a trip that was supposed to be an escape from the grim everyday.”

It all sounds very upsetting and we have great sympathy for Christian and his wife.

While much of his understandable anger is directed at the laundry service, we are not convinced it is actually to blame for the clothes Armageddon unless, that is, a specific request for the items to be dry cleaned was made.

That does not appear to be the case. While common sense would also suggest that the staff in the laundrette should have taken a look at the items and deduced that washing and tumble drying a wax jacket and a cashmere jumper in the same load was not a good idea, someone should have made it clear to them and not relied on common sense to prevail. In our experience common sense is frequently in short supply.

Realistically, the only people who could have made it clear to the laundry service that the items were dry clean only were Stauntons on the Green staff. That did not happen. Maybe that was because there had been a miscommunication between them and their guest or maybe he did not make it sufficiently clear that the clothes were dry-clean only.

We contacted the hotel and a spokesman confirmed that the clothes had been damaged and said that communication with our reader was ongoing and he was hopeful the hotel would be able to reach a resolution our reader would be happy with in the very near future.