Frustration and fury: reader paid for parking but still got clamped 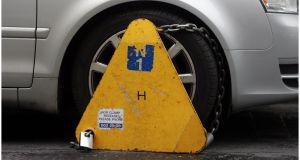 Being clamped is frustrating at the best of times but it is a whole lot more infuriating when you have actually paid for your parking.

This happened to a reader called Morena who found herself in Sandyford in Dublin towards the end of March. She has since made multiple contacts with the clampers; has had appeals rejected and even went to a Citizens Information office to see if they could help her out. They couldn’t but they did have the good sense to suggest she contact Pricewatch.

“On March 22nd I parked my car in Sandyford, using ‘Park by Text’ to pay,” her mail starts “ I chose Blackthorn Court as the location, because there was no signage anywhere nearby so I picked the one available from the drop-down list.”

Seems fair enough to us. She paid for her parking correctly and received a confirmation email. “When I came back, my car was clamped. I had to call NCPS [the parking operator] and pay €125 to get somebody to come over to remove the clamp. After about two hours, the guy came over and said: ‘I think you should appeal this because you did actually pay for parking as we cover this area too’.”

She then found out that the parking area is “Atlantic Homecare”, “however, there is no signage anywhere that mentioned ‘Atlantic Homecare’,” she says. She took pictures to prove this point.

Her appeals fell on deaf ears. “I also contacted Dún Laoghaire Rathdown County Council and the Competition and Consumer Protection Commission but both said they have nothing to do with clamping.”

On that evening she was clamped she had to cancel a few meetings “because I had to wait for the NCPS to come. So I lost some business too”.

She feels hard done by on the basis that she could not find any signage or information on the app to indicate what parking zone she was in. She believes she should get a refund.

We got in touch with the clampers who sent us the following statement: “NCPS would point out that in this case the Site Number (ie the location) was on the signage in the car park. This would have identified the location when paying by ParkbyText. However, as the lady had paid the charge, as a gesture of goodwill NCPS will refund half of the clamping release fee.”