Crash barriers but no long queues outside flagship Woodie’s store 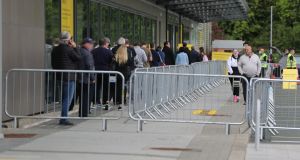 The yellow sign warned of “very heavy queues” aheads and asked the public “to bear with us”, but only a handful of customers were present for the big opening of Woodie’s in Bray.

Most who those who turned up at 7.30am on Monday morning did so anticipating a queue. Most queues are formed when people turn up early to avoid them.

Woodies had created the rows of crash barriers for the anticipated crowds expected at one of its flagship stores which is equidistant between Bray and Greystones.

Peter and Susan Moore from Loughlinstown were first into the shop. The gable end of their house needs painting. “We’ve everything done. We’ve cleared all the weeds out of the kerbs. That’s what we were doing last week. Today there will be four of us working on the house,” said Peter.

John Peare is building a bar for himself in lockdown in anticipation that the pubs won’t open for another 10 weeks and was loading wooden planks into the back of his car. “You have to enjoy yourself, don’t ya? This is my first time out in six weeks,” he said.

Sean Matthews was delighted with the small tin of undercoat that he bought to finish painting his garden gate. “The job is hateful at the end of it. I’ve been avoiding it for five years. I’ve got the urge and I’ll continue.”

The world has changed since Woodies shuts its doors on March 28th. All the staff are wearing masks and gloves, some wearing the N95 surgical masks that used to be worn by painters on the job and have now become a symbol of the pandemic.

There are perspex screens, hand sanitisers and signs everywhere asking people to social distance. It would all be shocking if we weren’t all used to it by now.

Woodie’s chief executive Declan Roynane said the company, which owns 35 stores in the Republic, has “had a hell of a battering” over the last seven weeks. It has been paying its 1,400 staff through the Government’s wage subsidy scheme.

“We are a costly business and we have had no revenue coming in. This thing will end eventually. I want colleagues to be able to say that our business went out of its way to protect us. It’s physical and psychological,” he said.

By midday the crowds outside the Woodie’s had thickened to approximately 30 customers waiting patiently in mind.

Outside Newlands Cross garden centre in Clondalkin, a queue of people did materialise for its reopening at 9am.

A steady drizzle started to fall on the early arrivals who started queuing at 8am, but rain has been as rare as good news this spring and no one was complaining.

Ray Bullock was among them. He has an ornamental pond that needs plants. “I’ve been looking at that pond for the last two months,” he said.

Celestine Walsh loves Newlands Cross garden centre so much that she has her birthday there every year. The centre’s cafe remains closed, but everywhere else was opening.

She piled the trolly to capacity with clematis, camellias, potting compost and tomato feeder. “I miss my garden stuff something terrible. This was the worst thing about it,” she said. “I meet my sister here once a week.”

The opening of Newlands Cross has come as a relief to the Devitt family who have run the business for 44 years. Marie Devitt said she had been looking forward to it “with fear and anticipation”.

There were 2,700 online orders waiting for them on April 14th when they reopened to home delivery . “We had to close down our website several times,” she said.

She seemed well pleased with the orderly way in which people queued outside Newlands Cross. “We were worried that people would all land on us ta the same time. Everything will get back to normal and people will find their niche. It’s baby steps for the moment.”