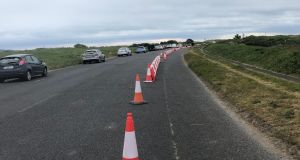 Causeway Road, which runs through the nature reserve to Dollymount Strand, was closed to traffic at the beginning of April following Garda concerns over the public’s observance of the 2km Covid-19 restrictions.

The road, which provides access to St Anne’s Golf Club, was reopened on Monday morning, with a line of cones and barriers to provide a segregated space for cyclists.

On Friday morning Dublin City Council said this would be a 4m wide reservation for the “exclusive use of pedestrians and cyclists”. Later that day it decided the lane would be 3m and would be used for pedestrians only.

However, the lane in place on Monday was less than 2m wide at its widest point, and has no signage indicating it should be used by cyclists.

Most cyclists and walkers on Causeway Road on Monday said they thought it was an additional footpath.

“If there was a sign there we missed it,” Mick O’Brien, who was cycling with his son Luca, said.

Luca (9) said he was disappointed cars have returned to the causeway. “I don’t really like it. It was quite nice for kids when all the road was closed. It was really peaceful.”

Mr O’Brien said he was “biased” as he is a member of the golf club so he wants the road open for access. However, he said he would like to see better provision for cyclists.

Ms Cooney said the segregated lane was “completely inadequate” and was a source of confusion for all road users. “First it was 4m for cyclists and walkers, then 3m for cyclist only, now in places it dwindles away to nothing and there are no signs at all saying who should use it.”

She said the objective to provide safe infrastructure for cyclists and walkers has “entirely failed” and the road should be closed again until the issue was resolved.

“What is there now is unsafe, and frankly insulting. I am pleading with the council to close the road now until a dedicated cycleway can be put in place.”

A spokesman for the council said the barrier was installed before Causeway Road was reopened on Monday morning “in order to claim space on the road” to improve the access for cycling to the nature reserve and Dollymount beach.

“Works will be on-going for the next two weeks to increase the width of the pavement for both cyclists and pedestrians and at that stage signage will be installed,” he said.