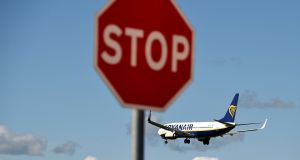 Ryanair and Aer Lingus have been forced to cancel flights this weekend because of a strike by French air traffic controllers. File photograph: Clodagh Kilcoyne/Reuters

Ryanair and Aer Lingus have been forced to cancel flights this weekend because of a strike by French air traffic controllers (ATC).

On Friday, the airlines advised passengers to check their flight details for the coming weekend, and warned that numerous flights were at risk of cancellation due to the decision by French ATC workers to carry out further strike action.

The industrial action is due to take place from 5.30am on Saturday, June 30th, until Monday, July 2nd.

This weekend’s strike, which will affect passengers travelling to mainland Europe, particularly to Nice, Marseilles and Lyon in France, is expected to cause chaos for the many families booked to go on holidays as primary schools close for the summer break.

A statement from Ryanair said that as a result of “this unjustified strike action” it had been forced to cancel a number of flights on Saturday and Sunday , adding that all affected customers had been contacted by email and text message and advised of their options.

Ryanair customers affected by the cancellations are entitled to a full refund, rebooking on the next available fight or a transfer to an alternative flight. The airline advised passengers to keeping checking the status of their flight ahead of travelling.

Ryanair has called for action from the European Commission to prevent more ATC strikes and staff shortages disrupting people’s travel plans over the coming months. It tweeted that this weekend’s industrial action will mark the ninth weekend in the last 13 that French ATC workers have gone on strike.

By Friday afternoon Aer Lingus had already cancelled four flights for Saturday and warned of further cancellations and delays over the weekend due to “significant flight disruption” caused by the ATC strike.

It advised passengers travelling to European destinations with the airline to check the status of their flight online before leaving for the airport.

Aer Lingus is offering affected customers the chance to change their flight to a later date free-of-charge, but warned that due to the busy summer schedule there would be limited availability on many routes. Customers may also request a refund on their flight or to be accommodated on the next available flight.

Dublin Airport tweeted that the strike had meant that a number of European flights to and from the airport had been cancelled.

“Passengers are advised to check latest flight info with their airline before coming to the airport,” it wrote.

For several months, France’s 4,000 air traffic controllers have been engaged in a series of strikes to protest against staff cuts and a lack of up-to-date technology for them, which is blamed on a “lack of investment”.

Ryanair warned earlier this month that there would be an airspace “meltdown” unless urgent action was taken to halt the rolling industrial action by French controllers.

A report published earlier this month found that between 2004 and 2016 French controllers were on strike for a total of 254 days, far more than the figures for controllers in any other European country. Second were controllers in Greece, with 46 days, followed by Italy, with 37 days, and Germany, with four days.