Irish Ferries yet to re-arrange more than 800 bookings 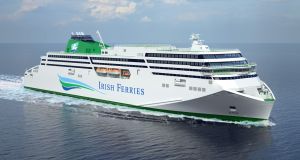 Irish Ferries have yet to re-arrange more than 800 bookings that were cancelled due to delays in the completion of a new vessel.

The company have rearranged 85 per cent of the 5,746 cancelled bookings that were due to travel to France this summer, but 15 per cent remain unresolved.

“Irish Ferries is continuing to assist passengers in making alternative travel arrangements to France as best it can. If alternative travel arrangements do not suit, customers will, of course, be entitled to a full and immediate refund of all monies paid. Irish Ferries again apologises for the inconvenience caused to passengers booked on these sailings,” the company said in a statement.

About 10 per cent of customers affected have cancelled their bookings completely. They have been refunded in full.

The majority of other have secured alternate transport on Irish Ferries direct sailings on either the Oscar Wilde or the Epsilon.

Irish Ferries said it would cover extra petrol/diesel payments for those who decide to drive instead but not extra overnight accommodation.

It is estimated that about 19,000 people were affected by the cancelled bookings, as many of the bookings would have been families and large groups.

The National Transport Authority is handling about 30 complaints that have been elevated to them in regards to the disruption.

Customers have taken to Twitter to voice their frustration as many found out about the cancellations through social media and have had difficulty contacting the company.

“No plan in place to handle the thousands of affected passengers calling to find out what alternatives you are offering before breaking the #news that you are ruining our summer holidays!!! Trying to get through for hours,” tweeted Melissa O’Connor.

The WB Yeats is Irish Ferries’ newest vessel and was supposed to begin sailing in July. However, due to “extraordinary circumstances beyond its control” all July and August bookings were cancelled.

The delivery of the €147 million vessel to Ireland had been delayed by German shipbuilder FSG who in a statement attributed the delay to late receiving of parts but made no apology to customers.