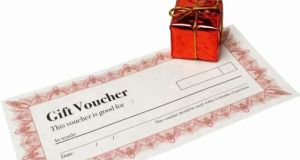 Minister Heather Humphreys said that for the last few months, she has been developing proposals to introduce a minimum expiry date of five years on gift vouchers. Photograph: iStock

A fresh set of plans aimed at introducing a minimum expiry date of five years for all gift vouchers has been announced by the Minister for Enterprise Heather Humphreys.

While the minister did not outline a precise timeline for when the proposals will become law, she said they were at “an advanced stage” and would be brought to Government “as soon as possible”.

Consumers may be forgiven for raising a sceptical eyebrow at the news however as they have heard this before.

In 2015 her department and its then minister Richard Bruton published a draft consumer rights bill which contained a number of provisions for the regulation of gift vouchers, including a proposed ban on expiry dates.

Some businesses expressed concern about the impact of a complete prohibition on expiry dates which proved to be a stumbling block.

Progress in these two areas has been slower than expected and delays at EU-level have prompted Ms Humphreys to proceed with a standalone proposal on the issue of the expiry dates for gift vouchers.

“There’s no doubt that there are great advantages to gift vouchers,” she said. “Ireland has no legislation regulating their expiry dates, which causes confusion and worry to many consumers,” she said. “This can be particularly frustrating where the vouchers themselves aren’t clear about their cut-off point.”

She suggested that “for too long the waters have been muddied for consumers and businesses alike, so I want to act now to ensure clarity for everyone. For the last few months, I have been developing proposals to introduce a minimum expiry date of five years and I’m pleased to say that they are now at an advanced stage. I will be going to Government to seek approval to draft a bill shortly.”

She expressed optimism that the proposals would “make a real difference to consumers for the better. Let’s face it - we’re all consumers and this is an issue that affects most of us, so I’m hopeful that the move can be agreed by all parties in the Oireachtas. ”