Pricewatch: Irish couples spend an average of €25,000 on their royal occasion 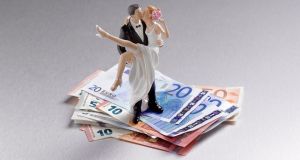 When television producer Sally Roden set out last year to make a documentary for RTÉ featuring some of Ireland’s longest married couples she assumed she would have to give over a big portion of the programme to their wedding days.

But when Golden: Our 50 Years of Marriage aired late last year the actual days the couples tied the knot barely featured.

Speaking to Pricewatch earlier this year Roden said she had been struck by how little importance these Irish couples who had really stood the test of time had placed on that one day.

Ned and Eileen Cusack, who starred in the documentary, got married on a warm June day in 1944 at St Patrick’s Church on Galway’s Foster St before having a small wedding breakfast at the Skeffington Arms Hotel. He wore his uniform and she wore a coral pink frock bought in Moons (which is now Brown Thomas).

“You would never have had a big wedding back then, it was the Emergency after all and if there were 20 people at a wedding it was considered big,” Ned told Pricewatch ahead of the couple’s 73rd Valentine’s Day together.

It is a different world now and tens of thousands of couples who will get married in the months ahead will be placing an enormous emphasis on their enormous weddings.

Nowhere, however, will the cost be as enormous as what the world witnessed on Saturday.

Meghan Markle and Prince Harry’s wedding has – by some reports – cost €35 million. While about €32 million was spent on security including snipers, undercover police, military technology, security drones and all the rest, the – hopefully – happy couple still managed to blow almost €3 million on the actual wedding.

While Irish couples aren’t that crazy, they are not to be left in the ha’penny place when it comes to spending. A survey published by Confetti magazine suggest that Irish couples spend about €25,000 on their wedding although more than a third say they exceed this amount.

Brides spend an average of €1,697 on their dress and €434 on accessories, including veils, shoes and jewellery. Kitting out a groom is considerably cheaper and the average cost for a groom is €697 – and even if they use it only for funerals the cost per wear for their clobber is a whole lot less.

Irish couples invite about 170 guests with the average cost of a reception being €12,258. All told, 58 per cent of those who took part in the survey say they got married in a church at a cost of €690.

An average of €470 goes on ceremony music while wedding bands earn a not too shabby €1,969 with another €461 going on the DJ. The flowers are another €695 while the cake costs €410 and the stationery €359. The Confetti list goes on and on but it was giving us a headache so we had to stop reading.

The wedding industry is big business in Ireland and at every corner there appears to be people looking for money from the photographer to the priest.

Say the word wedding bouquet to a florist and watch the euro symbols magically appear in their eyes while DJs and bands rub their hands with glee when they are approached by loved-up couples looking for a boogie.

While you can lie to a florist and pretend you are booking a regular bouquet to see if you can get it for less, you can’t really lie to a wedding band as they are bound to smell a rat if they are booked for a regular gig and see a bride flouncing about the place.

Some wedding shops even charge a booking fee for dress fittings to – they say – make sure people actually show up when they say they will, and to deter tyre-kickers or brides-to-be showing up week after week trying on dresses before taking their business online.

If you want to save for your wedding, it will probably take a whole lot longer than you think. If you reckon your wedding is going to cost €22,000 and you can afford to put aside €400 each month, it will take you at least four years to get the money together.

“I was surprised at how expensive things have been,” says Sharon Browne. “I was hoping to get it all done for under €20,000 but I think we’re already on €21,000 and I haven’t got the bridesmaids’ outfits or my fiancé’s.”

We have to take our jaw off the floor when Browne, who recently featured on RTÉ’s Say Yes to the Dress, tells us she is inviting 300 people to the wedding. Pricewatch doesn’t even know 300 people never mind know them well enough to want them at our most special day.

“My fiance has a lot work colleagues and their partners and we can’t just invite a few of them and leave others out,” she explains. We try to convince her that that is exactly what she should do but she is having none of it.

“We have to invite everyone,” she insists. “I think the hotel is charging either €45 or €55 a head but the price does include the wine, the champagne reception and hotel rooms so I think it is actually quite good value for money.” All told the price will be in excess of €12,000.

She tots up some other costs, including €2,000 for the photographer and €1,400 for the video. “Then there is the hair and make-up for myself and my mother and the mother-in-law, the bridesmaids and my five-year-old daughter, that’s going to be at least €400 and the make-up will be another €300.”

She has a new Mercedes booked to get her to the church on time at a cost of €375.

She and her husband-to-be have been together for nine years and engaged for three and she “really started planning the wedding last year”. They are getting married on May 25th, 2019.

“I’ve a lot of stuff done already and I’m trying to put some of the stuff I need aside, things like jewellery, bathrobes and slippers.”

Sorry, what now? “Oh, you have to have bathrobes and slippers for that before-wedding photograph,” she laughs. “In fairness to Penneys, they have some really fantastic stuff in their wedding section. I am quite enjoying all the preparation. I made all of my own invites last year when I was on maternity leave. I have a 13 month old now and a five year old and can’t really be doing that stuff as well as a full-time job.”

She mentions the marriage course which will cost €150 and the wedding registration and the priest. “There’s a lot more to it than I thought but I would probably still do it all again even with the benefit of hindsight. Although now that I think of it, when my parents got married 35 years ago they were able to build a house and pay for their wedding for €14,000.”

We suggest that at least she should be in line for a big chunk of cash with guests now typically expected to hand over €200 per couple. “I don’t really think I’m relying on presents,” she says. “I mean some people don’t give anything and I’m not getting married to get gifts although some money would help.”

Peter Kelly is better known in wedding circles as Franc and in Say Yes to the Dress he helped Browne get her guna deas. “I see weddings coming in at €27,000-€120,000,” he says. “Typically people will spend between €15,000 and €16,000 on the hotel and then there is the dress, the band, the DJ, the photographs, videography and more, and people should budget €1,500 for many of these things.

“I think the nature of wedding photography has changed dramatically in recent years and most people are looking for someone who is creative and who can look at the wedding through a lens nobody else is carrying. People are looking for shots where no one is looking at the camera while years ago wedding photographs were all about everyone standing in the line and Aunty Nuala standing beside Auntie Margaret. Instead of capturing moments now I think people want to capture emotions. And that is not easy to do.”

He says people try to create the perfect Instagram wedding. “I don’t do Instagram weddings. You can see some weddings and they look absolutely perfect on social media but they are really boring in reality.”

He says the first thing he does when dealing with a couple is to “go back to basics” because “trying to explain what a wedding is like to someone who has not been married is a bit like trying to explain what having a baby is like to someone who has not given birth, it’s just impossible to explain unless you’ve actually been through it. But the most important thing is to make sure the bride and groom have fun so everything has to be about them.”

He says that chocolate fountains, doves and photo booths are not so in this year and have been replaced by Tayto sandwiches and photo stations where people can pose and the Cloud. “People are being asked to download an app to allow all the photographs they take on the wedding day to be automatically uploaded to a server for the bride and groom to look through.”

Strict rules on queuing as Dublin shops prepare to reopen