Need proof the banks have it in for us? Here are 10 examples 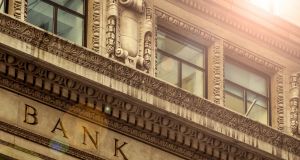 Banks are horrible to people who are guilty of the most minor transgressions. Spend just a few bob more than you have and you will be hit with ridiculous charges.

“Whatever your financial need, we have the product,” promises one Irish bank’s current ad campaign while another assures us it is the “bank of you” – whatever that means. “We keep giving, so you can keep living”, says a third while a fourth tells us it goes “further to make mortgages easier”.

Even judging by the sometimes loose arrangement advertisers have with the truth, the current crop of tag lines our banks are using are spectacularly shameless.

A more honest tagline – and one which could be used by all the banks would read: “We really hate you and we will do everything in our considerable power to gouge and harass you at every turn. We will write you rude letters and phone you repeatedly if you are so much as an hour late paying us the fiver you owe us. And we will continue to relentlessly withdraw services and dehumanise our offering in order to maximise the profits of international financiers. Oh and you know all those billions you gave us when we screwed up and wrecked the economy? Sucker!!!”

It might not help them attract new customers but at least it would be true because our banks clearly hate us. Need proof? Look no further.

1. Almost all the mortgage lending banks in the State stand accused of – effectively – stealing money from their customers and the true scale of the tracker mortgage scandal is only slowly emerging mostly because our banks have done their best to stop it from emerging for years.

The impact it has had on the lives of thousands of people who, through no fault of their own, were put through the wringer for years is appalling. A person wrongly taken off a tracker in 2008 will have handed over around €33,000 more than they should have up between then and now.

The banks’ negligence meant people were put under huge financial pressure. Some of those people lost their homes. Many others got sick. Relationships broke down and people went without essentials such as food, heat, light, education in order to meet payments that were far higher than they should have been.

The banks claim it all happened in error and they have been very slow at resolving the problems. A cynic might wonder why it is that such errors only happen in the banks’ favour and then ask themselves how is it that banks can respond with lightening speed when customers breach agreements and miss repayments and then at a glacial pace when it is the other way around.

2. In recent years banks – and in many cases the banks we all bailed out – have sold hundreds of millions of euro worth of non-performing loan books to private equity firms and hedge funds. Many of the vulture funds buy these loans at massive discounts and then try to maximise their profits as fast as they can by putting individuals under enormous pressure to pay what they owe or face repossession or other court proceedings. How galling is it that the banks can sell these loans at discounts of more than 50 per cent while refusing to even countenance debt forgiveness to individual homeowners in distress?

3. Back in the boom times, banks threw cash at us. After the cash came the crash and our banks were all of a sudden tighter than Rod Stewart’s trousers. They stopped lending money and even getting a small overdraft became a trying experience. Nowadays when you apply for a loan big or small you can expect to be grilled by a condescending 20-something in a cheap suit who will put all of you finances under the microscope before denying you a €50 loan unless you have the credit record of a Swiss multi-millionaire.

4. Our banks decided a while back that they’d rather not waste their staff’s time dealing with people or handling piddling sums of money. That is why seeing an actual staff member in a bank branch has become something of a rarity. There are some bank branches that don’t actually have tellers or bank counters or anything that actually makes a bank a bank. Banks impose limits on what they will do for us or how much we can withdraw or lodge over the counter. Take Bank of Ireland. It can’t be bothered dealing with anyone unless they have more than €700 to take out at any given time or more than €3,000, or 15 cheques, to lodge.

5. We have heard stories of people cancelling credit cards and debit only for banks to honour payments from big companies that were attached to the cards. Then the banks hound the customers because they have an unauthorised overdraft.

6. When was the last time you got a fiver out of an ATM machine? Even tenners are pretty rare these days because banks would prefer to load their ATMs with €20s and €50s. That’s grand until the end of the month when you only have €48 in your account which you can’t access because the machine only has 50s left.

7. While the tracker scandal is front and centre it is not the only time banks have been found wanting. A few years back, more than 160,000 Irish consumers were ripped off by up to €200 after the banks mis-sold credit card protection. They sold the “insurance product” to people who already had it and to people who would never be able to claim on it because of their personal circumstances. And they did so because they profited handsomely from the policies.

8. For years banks have been screwing customers on variable rate mortgages. They currently stand at anywhere between 3 and 4.5 per cent which is substantially more than it costs the banks to borrow and well over the average variable rate across the euro zone and more than three times the tracker rate. When the banks are challenged on this they wring their hands and say there is nothing they can do. And they know they can get away with it because the Government is powerless to force them to do anything. And very few of their customers are sufficiently motivated to put manners on them by actively seeking better value elsewhere.

9. Banks are horrible to people who are guilty of the most minor transgressions. Spend just a few bob more than you have and you will be hit with ridiculous bank charges and you will get letters from “customer service” staff warning you not to do it again. Miss a payment and you can expect phone calls from people who will start the conversation by demanding to know your mother’s maiden name. Seriously? Who starts a conversation like that? Bankers. That’s who.

10. Branches are closing all over the country as banks seek to “improve their service” by curtailing their services.

It is not all bad. Contactless cards have made life easier as have online banking and apps. The more reckless mortgage lending of the past has been largely stopped and the banks are making money again which means that our economy is less of a basket case than it once was.