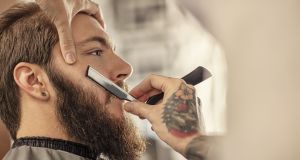 The rise of the image-conscious Irish male is being blamed for a national shortage of barbers. File photograph: Getty Images

The rise of the image-conscious Irish male is being blamed for a national shortage of barbers, with the Government being urged to bring in overseas haircutters to help cope with surging demand.

Barbers are currently included on the ineligible categories of employment list, which bans certain workers outside the European Union from applying for work permits here under a scheme to fill staff shortages in trades and occupations.

Minister for Business Heather Humphreys has been asked, through a parliamentary question by Independent TD Noel Grealish, to remove the trade from the list “in view of the fact that there is a significant shortage of barbers nationwide”.

The Irish Hairdressing Federation (IHF) has also made a submission to the Minister on the same grounds.

IHF member Greg Koster (50), who runs Knights of the Green barbers in Dublin’s St Stephen’s Green shopping centre and a barbering school, blames the shortage on a sharp rise in demand rather than people leaving the industry.

“Young men are more image conscious now,” he said. “The thought of looking in a mirror when I was a younger man would have been terrible vanity. You would have been slagged for it.

“Now, men are unashamedly looking after themselves and they’re in the market for more styling.

“There are guys who get their hair cut every week or two, just to have that look.”

Mr Koster estimates younger men are getting “twice as many haircuts” as their elders, while demand for beard trimming, hot towel shaves, cleansing and face massages is also increasing.

“The lack of barbers to keep up with it is very concerning,” he said.

The Central Statistics Office puts barbers in the same professional category as other hairdressers and beauticians, with latest figures showing an increase in the numbers working in that category from 21,169 in 2011 to 25,697 in 2016.

But Mr Koster said more than 200 barber vacancies are advertised on any given day in Ireland on websites.

“If demand keeps going up, there will be wage pressure, which will affect what we charge,” he said.

“They have already increased the VAT rate and the minimum wage and the training rate was abolished in March.”

Meanwhile, Ms Humphreys said barbers would need to demonstrate clearly that recruitment difficulties are solely due to shortages within the EU and not about salary or other conditions if they are to be removed from the work permit ban.

“Organisations in the sector would need to provide the necessary data to substantiate their claims,” she said.

“A detailed evidence-based case for removal of barbers from the ineligible list . . . would then need to be put forward to my department for review and consideration by a standing interdepartmental group.”

Mr Grealish did not respond to calls for further comment.