Pricewatch: Several readers have trouble getting transfer costs back from the airline 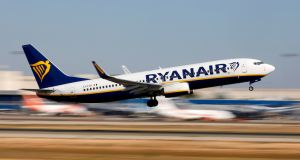 Due to weather conditions, the Ryanair flight landed at Dublin Airport instead of Shannon. Photograph: Reuters/Paul Hanna/File Photo

We don’t often have cause to revisit stories that we feature on this page but, for reasons that will no doubt become apparent, we feel compelled to do just that this week. It has to do with Ryanair and it is disturbing on a couple of levels.

On Friday, April 26th, a reader by the name of Adrian Gordon and his wife took a flight from Malaga airport to Shannon Airport. Due to weather conditions, passengers were advised by the pilot as their plane began to land that they were landing at Dublin Airport instead of Shannon.

All passengers were told to go to the Ryanair desk at the airport so transport to Shannon could be arranged.

The plane duly landed at Dublin Airport shortly after midnight and, as instructed, Adrian went to the Ryanair desk where he was told that because a lot of flights had to be diverted from both Shannon and Cork Airports there were no more buses available.

He was told to hire a car or get a taxi to Shannon and that Ryanair would refund him the cost within seven days.

As it happened, Adrian did not have his driving licence with him so he and his wife had no option but to hire a taxi from Dublin to Shannon Airport at a cost of €440.80. When he got home he sent a claim to the airline.

However, despite the promise made by crew on the ground in Dublin, the airline refused to refund the cost of the taxi and instead it insisted “that surface transportation was arranged by them for all passengers”.

So Adrian contacted us on May 3rd and we immediately contacted Ryanair after which we received a distinctly terse statement which said simply: “We’ve resolved this directly with the customer.”

Now we could have left it there but we decided to check with “the customer” and we got in touch with Adrian again.

He told us that he had indeed received a call from a representative of the airline and had been told that a refund would be with him in a matter of days. Happy days, we thought.

But no. Weeks past and no refund came.

In the meantime other complaints about the same flight started coming in to the Pricewatch desk.

First there was Barth Hooper. He told much the same story as Adrian. Having made their way to the Ryanair rep on duty in Dublin Airport as instructed by the pilot, he and his wife were told “no bus [was] organised and we should make our own arrangements”.

Barth’s wife “queried as to whether that meant we should organise our own taxi or car rental and the Ryanair representative said yes. To ensure that there was no misunderstanding, my wife again queried as to whether it was definitely acceptable to organise alternative transport to our original destination and queried as to how we would be refunded for same. The Ryanair representative clarified that this was acceptable and that an application for a refund for same could be made through the Ryanair website.”

So the couple hired a car. They even gave another group a lift to Shannon – an act which would have saved the airline the expense. But then when Barth went to claim the money from the airline, he received a mail which said: “Operations Department has confirmed that surface transportation was organised for all customers to their original destination and as such we are not liable for any alternative transportation costs you may have incurred.”

Then there was Colm McEnery. He had no choice but to hire a car at a cost of €301.60. Like Barth, he gave a group of other passengers on the plane a lift to Shannon – saving Ryanair money. But his claim was also refused by Ryanair

Peter McCarthy was on the same flight as was Claire Sloan and Diana Fahey. Like all the others they were told by Ryanair that “Our Operations Department has confirmed that surface transportation was organised for all customers to their original destination and as such we are not liable for any alternative transportation costs you may have incurred.”

This claim, which had been made repeatedly by Ryanair when affected passengers tried to claim back expenses incurred, was clearly untrue.

Now, back to Adrian Gordon, the first person to contact us.

As you will recall, when we contacted Ryanair in early May we were told that it had “resolved this directly with the customer”.

But that was not actually true either. Over the weeks that followed, in spite of the claim by the airline, the refund Adrian was told was on the way never materialised – he contacted us several times with updates.

So at the end of the month we got back on to Ryanair and asked why it had not honoured the commitment it had made to Adrian.

While we were at it we also sent details of the other passengers’ complaints to the airline. And once again the airline said, “We’ve resolved this directly with the customers.”

This was a line we were growing used to hearing. So we kept at it and then on June 11th – almost six weeks after the airline had claimed to have resolved the issue with Adrian and after we had interceded twice on his behalf – he got in touch to say he had finally got his refund.

We have also followed up with the other passengers and they too have been refunded.

But all of this raises an important point. Every one of these passengers were told at the airport they could hire a car or get a taxi from Dublin to Shannon because there was no buses available. Yet all of them were told subsequently by the airline that its “Operations Department has confirmed that surface transportation was organised for all customers to their original destination and as such we are not liable for any alternative transportation costs you may have incurred.”

That claim made by Ryanair in its rejection letter was clearly not true.

So last week we got back on to the airline and asked why its email correspondence with these passengers made a claim that was clearly untrue. We also asked if there were other cases of it responding to its passengers looking for expenses incurred or money back with similarly untrue claims.

We received the following statement: “This flight from Malaga to Shannon (26 April) diverted to Dublin due to unfavourable weather conditions at Shannon Airport. Ground transportation was organised from Dublin to Shannon but not all customers were accommodated on the bus transfers. We have been in contact with these customers directly.”

Keen eyed readers will notice that this response did not really address the questions we had put to the airline so we tried again. We asked why the initial correspondence had contained a claim that was untrue and asked if it was aware of other instances when its correspondence had misled passengers looking for money they were entitled to back.

“Ryanair has nothing further to add,” was all that came back in response.