Egg hunts, fairies and films: cheap days out for children at Easter 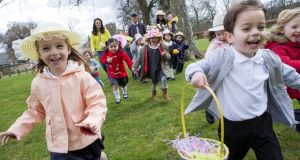 Organising an Easter egg hunt one is simply and cheap and fun for everyone. Photograph: iStock

Easter is almost upon us, bringing with it the promise of egg-shaped chocolates, slightly less miserable weather and – for many parents with children of school-going age – two weeks of free time to fill. As with most holidays, this free time is rarely free, so we thought we’d have a look for ways to keep kids busy that don’t cost the earth.

The hunt is on

When Pricewatch was young, there was no such thing as an Easter Egg hunt. That’s all changed. In fact, last week in the UK, such hunts were at the centre of a row between the Church of England and Cadbury and the National Trust after the Archbishop of York, Dr John Sentamu, accused the chocolate giant of “spitting on the grave” of its religious founder by removing references to Christianity’s most sacred festival from the spring event it runs nationwide with the conservation charity. The National Trust was slated for “airbrushing” Christianity out of its chocolate egg hunt, after a rebrand led to the renaming of the Easter Egg Trail as the Great British Egg Hunt.

Religious rows aside, organising an Easter egg hunt one is simply and cheap and fun for everyone. Buy some small chocolate eggs in your local supermarket (they even come in packs now), give your kids a small plastic pail, go to a local park or your garden, hide the eggs and away you go. If you have a range of ages, the trick is to colour-code the eggs . The preschoolers might be sent out to look for green eggs, the four- to six-year-olds can hunt for blue ones and so on. This increases the little ones’ chances of finding a few treats, which will reduce the chances of tears and keep their interest up.

Religious rows aside, organising an Easter egg hunt one is simply and cheap and fun for everyone

If you want to make it a really big deal, you could even give the kids maps and clues and turn it more into an Easter egg treasure hunt. Although that is not easy, unlike going to a hunt organised by others.

Brigit’s Garden in Galway is promising every child a prize of mini-eggs and a home-made Easter cookie. It also has a longer treasure hunt around its nature trail for older children, and the Easter Bunny is likely to show up. The Easter Bunny is also appealing to all children to bring their explorer and detective skills to the Irish National Heritage Park for the Annual Easter Egg Hunt, while over the weekend Glenroe Farm is hosting egg races and children’s entertainment, face painting, and the Easter Bunny. If you want to find an event near you, check out schooldays.iefor details.

Have your first picnic of 2017

We are conditioned to think we can only have picnics when it is sweltering. Nonsense. Picnics in April are just as much fun as picnics in July – you just need to wear more clothes and bring flasks full of soup and hot chocolate. Find a bit of green space and you’re all set. An average lunch for a family of two adults and two children will cost about €40 in a restaurant. A picnic will cost a tenner.

When it comes to giving out about the high cost of things, Pricewatch is rarely found wanting. But we are well-served by free attractions too. The National Gallery of Ireland is always among the most popular tourist attraction in Ireland, and more than 600,000 people walk through its doors every year without having to pay a penny. Then there is the Dead Zoo, or the National Museum of Ireland: Archaeology, to give it its stuffy real name. Throw in a trip to Farmleigh and the Science Gallery at Trinity College Dublin and you’ll have three free days out.

The National Botanic Gardens in Glasnevin is another national treasure that is absolutely free for all. It is beautiful on a spring day. You might have to pay a nominal sum for parking, but it is money well spent. Ever since they connected the gardens with Glasnevin Cemetery, it has become even more attractive. A visit to a cemetery might sound like a strange idea for kids, but Glasnevin is really special and they will love it. It is full of history, and the recreation of Pearse’s oration at the tomb of O’Donovan Rossa will have them transfixed. The small paths are also great for perfecting scooting, heelying or even cycling.

A visit to a cemetery might sound like a strange idea for kids, but Glasnevin is really special and they will love it

Dublin Zoo is great. It is not, however, cheap. The price of admission for an adult is €17.50, while a children’s ticket costs €13; a family ticket covering two adults and two children will set you back €49. A better idea, particularly if you live within striking distance of the place, is to buy an annual family pass, which costs €180 and gives you unlimited access for 12 months. The pass holder and three adults can visit, or the pass holder and two adults and two children, or the pass holder and six children. If you go to the zoo with your family once every three months, the pass will save you money. And with the pass you will find you go more often than that and you are never under pressure to see everything.

Over the Easter weekend the zoo has teamed up with the Irish Fairy Door Company, so children can go on a “fun, imaginative adventure” following “magical clues on the fairy trail”. Apparently there will be lots of enchanting fairy-themed activities including storytelling in the fairy ring, as well as fairy-themed games and face-painting. And if fairies aren’t your thing, there is a new arrival to see. Last month a female Asian elephant calf was born to Bernhardine (Dina) the herd’s matriarch, following a 22-month gestation period. The calf was 1m tall and weighed about 80kg.

There is a grand stretch in evening so there is. Take advantage of it. Bring them to the local park or set out for pastures new. Or, in the words of Coillte, “Come and join us for a unique, exhilarating and fun-filled day out at one of our spectacular 260 recreation sites around Ireland. From remote, off-the-beaten-track treasures like Wild Nephin in Mayo, to action-packed adventure spots like Lough Key Forest Park in Roscommon, we have somewhere to suit whatever outdoor activity you are looking for”. It has info on walking, cycling, orienteering, camping, ziplining, nature-watching, fishing, orienteering, horse-riding, boating and much more besides. Check out coillteoutdoors.ie for inspiration.

Become a tourist in your own country. Go visit the Phoenix Park with its maze and magic tree and its great playground. Plan trips around Airfield Estate, Ardgillan Castle, the Flaggy Shore in Kinvara, the woods in Barna, Coole Park, Avondale, Glendalough, the Sugar Loaf, Howth Head, the National Stud and Japanese Gardens, Ben Bulben and the Waterford Greenway. Admittedly you’ll not be able to do them all, but it is good sometimes ask yourself why tourists come here in such numbers – and then follow in their footsteps.

The magic of the big screen rarely fails to work its charm, and a number of family-friendly movies in cinemas happily coincide with the holidays, including The Boss Baby, Smurfs: The Lost Village and Peppa Pig: My First Cinema Experience. Book your tickets online and bring your own snacks – kids don’t really care where the jellies or the popcorn comes from.

Covid-19: Taoiseach says next two weeks are going to be critically important 17:12
Man (50s) killed in single vehicle crash in north Co Dublin 16:59
No plan for legislation to close meat plants in cases of Covid-19 outbreaks 16:57
Accused claimed ‘I know what it’s like to be a murderer’, trial told 16:08
Bus Éireann to shut many inter-city routes due to financial pressures 16:00