Pricewatch: Could the Government have chosen a better way to spend the €440m? 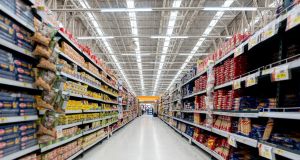 A quick glance might have left shoppers with the distinct impression that the labels were clear signs of good news. Photograph: iStock

Anyone taking a stroll up and down the aisles of Lidl in recent weeks might have had their heads turned by the flurry of bright red labels advertising a raft of price cuts across many of the discounter’s shelves.

A quick glance might have left shoppers with the distinct impression that the labels were clear signs of good news – who doesn’t love a discount after all? But on closer inspection some of the price reductions that were being advertised might have started to look just a little, well, weird.

A bottle of Lynx body spray was marked down from €4.59 to €4.52 while a twin-pack of own-brand Lidl razors which would have cost €1.09 in July cost €1.07 in September. Own-brand toothpaste meanwhile had dropped in price from 69 cent to 68 cent. The list of minuscule price falls was long and – unless you have been paying attention to the news in recent weeks – baffling.

Lidl actually deserves some credit as was one of the first retailers to pass on the 2 per cent cut in the top rate of VAT which was announced by the Government in its July Stimulus package. It actually rolled out the discounts in August although the VAT change officially only came into effect on September 1st.

According to the Department of Finance, the temporary reduction in the standard VAT rate from 23 per cent to 21 per cent will apply to about 50 per cent of economic transactions and among the items that the new rate applies to are clothes, electrical equipment, car fuels, alcohol and tobacco.

It will not impact services such as tourism ad hospitality which already qualify for a reduced 13.5 per cent VAT rate and the high rate of tax is not attached to many food items although sweets, and high-fat and high-sugar items do attract the highest rate of tax.

The tax cut came as something of surprise as, before July, it has been almost 10 years since we had seen any movement in the top rate of VAT. It last moved in 2011 at the height of the last great economic unpleasantness when the then finance minister Michael Noonan increased VAT from 21 per cent to 23 per cent.

It is worth noting that when he did that many of the State’s largest retailers including Tesco, Aldi, Lidl and Marks & Spencer absorbed the higher rate rather than passing it on to their customers.

Back to now, while on paper any kind of tax cut seems like a good idea, Pricewatch couldn’t help but marvel at the tiny price cuts being promoted in Lidl and we had to wonder about the futility of the move. Could the Government have chosen a better way to spend the €440 million it has decided to give away between now and the end of February?

Maybe the money could have been used to bolster the Pandemic Unemployment Payment or offer financial support to pubs that were forced to stay closed for more than six months or help the travel agents and tour operators who have had no income since the middle of March.

Of course Lidl was by no means alone when it came to highlighting inconsequential discounts that many people neither asked for or needed. Aldi did the same. Tesco rolled out the cuts across all its lines and said the changes would see as many as 20,000 products in its largest stores fall. Marks & Spencer passed on the cuts but – perhaps sensibly – applied them at the till and did not announce them on every single item impacted. Supervalu says it has passed on the VAT reductions to customers while Dunnes Stores, as it always does, has been keeping its cards close to its chest.

Netflix, for example, proudly announced that it was passing on the VAT savings to Pricewatch and to all its customers in Ireland. “Due to a temporary tax reduction, the cost of your standard plan is now €11.80 a month,” the mail it sent to us said. “After the regular tax rate resumes, your price will return to €11.99 per month,” it added.

Over the course of the six months that the cut will be in place, Pricewatch will save an impressive €1.14 which will allow us to buy a couple of disposable razors in Lidl with seven cent change to spend on some penny sweets – if we can find anywhere in the country that still sells such things.

The VAT cut has also lead to some weird anomalies in pricing which will see retailers give with one hand and take with the other. We are thinking of the socks that cost €1. Any retailer who passes on the full saving to customers will have to drop the price of their socks to €0.98. That is unless the person who buys them uses cash in which case the price will immediately jump back to €1 as a result of the rounding-up programme which has long been in place with a view to taking copper currency out of circulation.

While many people believed that once the tax cut was announced it would be obligatory for companies to pass it on, the truth is somewhat different. No company is compelled to pass on the VAT reduction to customers although the Minister for Finance Paschal Donohoe urged businesses to do it suggesting it saying it would help boost consumer confidence. The Tánaiste and Minister for Business and Enterprise Leo Varadkar pointed out that businesses could pass on the cut or hang on to it if they needed it to prop up their business.

Vodafone passed on the cut to consumers as did Three Ireland although only passed to its bill pay customers and business customers but not the prepay plans due to what the company said was a “significant technical challenges”.

Eir – in its ongoing attempts to secure itself the coveted title of Ireland’s most beloved company said it would not be passing on the reduction at all and said it would be using the money saved to keep jobs “as we face a significant challenge in the retail environment”. The company also pointed out that it did not increase its charges when VAT jumped from 21 per cent to 23 per cent.

Nor did Lidl or M&S.

Virgin Media was, if anything cuter still when it announced that rather than passing on the reduction it would be cancelling a planned “standard” price increase which was coming down the tracks while Sky offered its customers a €10 Sky Store voucher in lieu of the reduction. The company said this would be double what the average saving would be over the six month period.

The VAT on petrol and diesel is only added after carbon tax, excise duty other taxes are added which makes VAT an ad valorem tax – a tax on a tax and it should see the cost of fuel falling by around 2 cent per litre or around 60 cent per tank of fuel although that is only if the company in question passes it on and with the way fuel goes up and down and varies so wildly from forecourt to forecourt, the will be hard for many to establish.

It is worth pointing out that the VAT reductions will lead to bigger savings on the bigger ticket items – Renault was one of the companies which was first out of the traps with what it said was a VAT cut and announced that it would be giving customers €1,000 back on all new cars registered last month while anyone buying a Dacia Duster was in line for €750.

Whether or not a person in the market for a brand new car should be afforded a discount of such a scale is an entirely different question. And don’t get us started on any tax cuts on a packet of cigarettes.